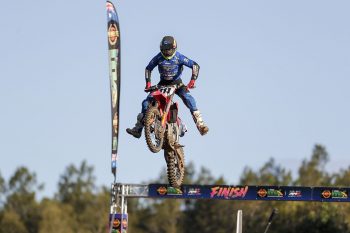 It was a perfect 1-1 scorecard for Dean Ferris at Coffs Harbour as the Honda Racing rider rebounded to take his second overall victory of the 2022 Penrite ProMX season.

Ferris crossed the line to claim the moto one honours after a late move on red plate-holder Aaron Tanti (CDR Yamaha Monster Energy) secured him the win.

The CRF450R rider landed the holeshot and led the race for the first 10 minutes, relentlessly pressured by Tanti. Tanti regulated the Honda rider to P2 and then stretched out a slight margin throughout the mid-part of the bout.

Ferris came back in the closing stages and pushed the number nine back to second. Tanti fell shortly after which dropped him back towards the trio of Kirk Gibbs (KTM Racing Team), Brett Metcalfe (GO24) and Todd Waters (Husqvarna Racing Team), fighting for third. Gibbs – who had to work his way forwards from an average start – quickly capitalised on Tanti’s mistake and made a move past the Yamaha rider after he remounted.

Metcalfe then passed Tanti on the final lap for third, with the Yamaha rider ultimately fourth, ahead of Waters. P6 was Hayden Mellross (GasGas Racing Team), as positions seven – 10 were occupied by Joel Evans (Honda), Joben Baldwin (Honda) and Joel Wightman (Yamaha).

Notably, fastest qualifier Matt Moss (BBR 102 Motorsports Yamaha) crashed on lap one and was hit by another rider when remounting. He hurt his hand as a result of the incident and retired from the race.

It was Ferris again who grabbed the holeshot in moto two before Tanti asserted himself at the front of the field in the early stages as he passed Waters and the number 111.

Ferris once more trailed Tanti for the opening half of the moto, before making his move on lap 10 of the race and clearing out to take a 4.1s victory.

With 50 points Ferris took the overall, ahead of Gibbs on 42 and Tanti (40). In the MX1 championship standings, Tanti still holds the red plate but Ferris’ double victory moves him up to second, 29 points from the lead. Waters is third, five points back from Ferris, tied with Metcalfe. 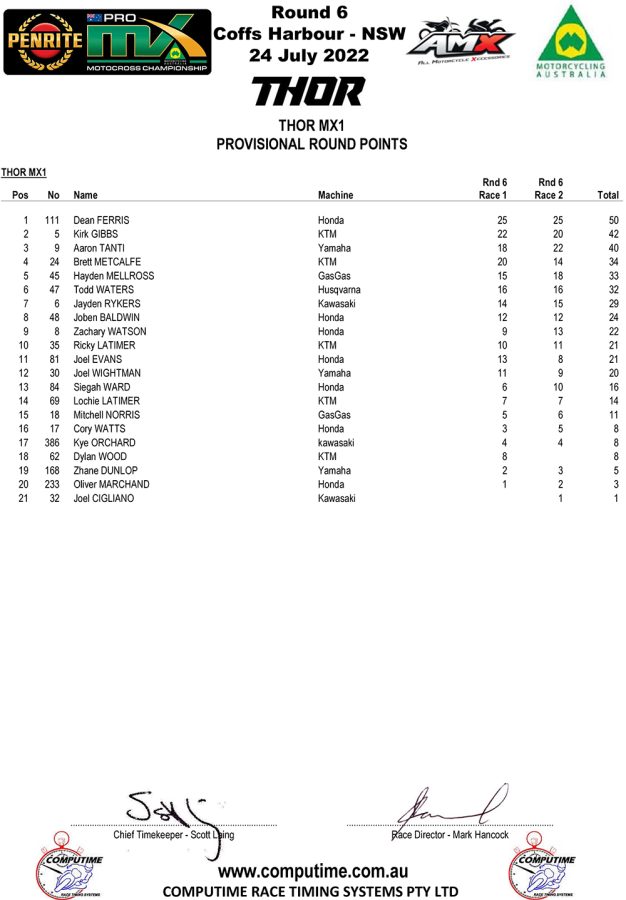