Crawford ‘between 70 and 80 percent’ ahead of Coffs Harbour return 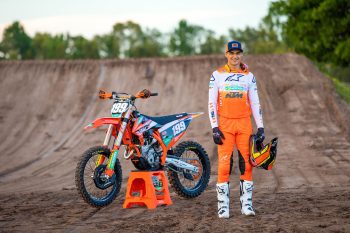 KTM Racing Team’s Nathan Crawford admits that overall he is ‘between 70 and 80 percent’ ahead of his MX2 return at Coffs Harbour.

Crawford was sidelined following a crash that broke his femur a week out from the opening round of 2022 ProMX at Wonthaggi, in March.

He will make his highly anticipated comeback at round six of this year’s Penrite ProMX Championship on Sunday after months of rehabilitation, and has no set expectations for the motos as he continues to build to his full potential.

“I’d say between 70 and 80 percent [overall], obviously, I’m not where I want to be,” Crawford said to MotoOnline. “Right before I hurt myself I was really starting to come good. Recovering from such an injury is definitely going to take time, but I’m in good enough shape to be able to line up and race comfortably.

“I’m just entering the weekend super open-minded and going from there. I feel like if I ride like I know how to and just take it how it comes, I might be able to surprise myself. No real expectation at this point, and I have no pressure from the team so just sort of taking it as it comes.”

This weekend will mark the first time Crawford has competed at a national motocross event in over a year, with his last outing in the ProMX Championship coming at Maitland, in June 2021. Notably, he was victorious in the second MX2 moto that day.