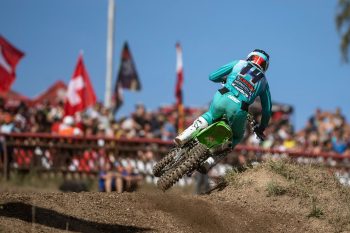 F&H Kawasaki rider Jed Beaton secured another top 10 finish in race two of the MXGP of Czech Republic, stating the ‘second moto was the best I’ve had for some time.’

Beaton held P7 for several laps in the second bout at Loket before being regulated to 10th in the closing stages as he suffered from race fitness in his build-back from injury.

The Australian gained valuable confidence from that outing, and ultimately finished 13th overall after his charge in race one was brought to an end when broken spokes – following a collision with another rider – forced him to retire.

“The first race was just a problem when the wheel was broken; I’d been making passes and was battling for fifteenth-sixteenth so the feeling was already good and the second moto was the best I’ve had for some time,” Beaton explained.

“I know I can do it, I just needed that one race for the confidence. It could have been even better if the race fitness had been there but it’s been a tough year coming back from the injury and the last three laps I was pretty done from the heat.

“But it’s a step in the right direction and I’m looking forward to keeping it up. Lommel’s always tough but it’s the same for everyone, I’ve done a lot of riding in the sand and I’m starting to come back to fitness.”

10th in moto two equals Beaton’s best race result since returning from a shoulder injury sustained in Italy. The number 14’s next opportunity to push forwards comes at round 14 of the MXGP World Championship in Lommel, on 24 July.