After a lengthy string of injuries, Australian off-road racer Tayla Jones is back to her winning best in the USA. The Rockstar Energy Husqvarna rider has just added a sixth US Sprint Enduro title to her name, and is currently leading the Women’s (WXC) championship in the GNCC. MotoOnline caught up with the 26-year-old to ask Five Questions. 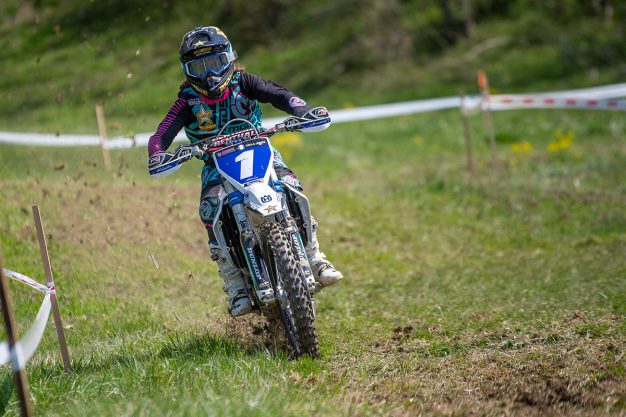 Where did you clinch the US Sprint Enduro championship?

I wrapped it up a round early in West Virginia. I just love the sprints. We raced them a bunch back in Australia, and when I moved here, it was the one series I wanted to do. The US Sprint Enduro came along a couple of years ago and they’ve taken it to another level. It’s very professional now and it’s cool to see how far it’s progressed over the six years I’ve been doing it. I was super-pumped to wrap up my sixth title since I moved here. The new venues are great, but the way the series is run very professional these days. Everything’s run on time, perfectly presented, and it’s cool to see the pros coming and racing now too.

What was the hardest part about bouncing back from consecutive injuries?

It’s been a roller-coaster, that’s for sure. I shattered my left hand in 2019, then had a knee reconstruction, broke my right hand, then broke my right elbow, all in two years. That sucked. The hardest part was coming back mentally. I’d had a few years of winning, and then it felt like I’d get hurt again every second race. With racing, you get confidence from winning, so when you’re not up there every weekend, it’s a lot harder to keep it fun. Coming back mentally has been the toughest, but continuing to find the fun plays a key part. Winning is fun, but realistically, you can’t do that every single weekend, so just letting go of the outcomes and accepting that whatever happens, happens.

Why do you think everything’s falling into place for you again in 2022?

I didn’t come into this year expecting anything and I don’t go to any race expecting anything. I just want to be there and honestly, I just enjoy riding my dirt bike, no matter what happens. I’ve gone back to having no pressure from the team or from myself, and as long as I ride like Tayla at each race, regardless of whether I finish first or last, then I’m happy. I’ll still go home and treat myself to my strawberry ice cream with M&Ms and smile about it. Who’s really stepped up in the WXC class this year?

All of the girls have found another gear, but the main competition is definitely Rachael Archer from New Zealand. She’s definitely there every weekend, and with her finishing second last year, we knew coming into 2022 that she’d be a real threat. Another girl, Korie Steede, has got a lot more consistent. We all knew she had the speed, but now you know she’s going to be right there every weekend. Everyone’s stepped it up to a level where you just don’t know who’s going to win every weekend. When I first moved here there were, like, five girls on the line and a couple of us were fast, and now we have, like five to 10 girls who are super-fast, battling it out every weekend. It’s awesome to see that growth.

When did you take over the lead of the GNCC?

I think I took over the lead at either the fourth or fifth round. I actually haven’t been following the points because I’m honestly going race-to-race. Everyone tells me I’m leading and while that’s cool, we’re now at the summer break and there’re still four rounds left and I don’t want to count my chickens before they hatch. My favourite races are at the start of the season when we’re down south in the sand, but Ironman’s always a classic at the end of the year. It can be fun but it can also be the worst round of the year, depending on the weather. I really enjoy Bechtel’s as well, which is the first round back after the summer break – it’s super-rocky like Snowshoe, but is still really enjoyable.