Third rostrum finish in E1 since 250 switch from round three. 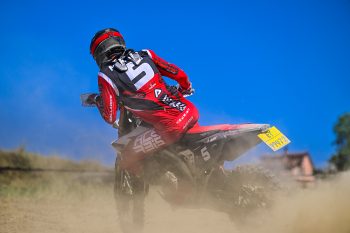 Fantic D’Arpa Racing Team’s Daniel Milner scored a breakthrough EnduroGP podium in round four of the 2022 WPTGlobal FIM EnduroGP World Championship as he finished third on day one in Portugal.

Milner reignited his international career this season after the Australian Off-Road Championship (AORC) was largely affected by covid in 2020 and 2021.

The multi-time off-road champion commenced the year competing on 450cc machinery in E2, before making the switch E1 on a 250 from round three in Italy. Immediately Milner scored a podium in class with second on day one at round three and backed that up with another rostrum finish, in class, on day two of the Italian GP.

Round four at Portugal, however, was Milner’s first outright podium in EnduroGP, where he completed the top three on day one and finished just 41.26s from victory. The result also saw him finish the day second in class to E1 points leader Andrea Verona (GasGas Factory Racing).

“It’s been a good day for me,” Milner explained. “The ground was really slick, with small stones and grit. I just did what I could and I’m so happy to have got onto the EnduroGP podium. I feel like I was able to get a lot closer to Verona today, so I’m stoked to be where I’m at.”

Unfortunately, Milner was forced to retire on day two of the event after a sizeable crash damaged his bike to the extent he couldn’t finish the race.