Assorted racer comments following the fifth round of the season.

In Quotebook, a selection of riders detail how their races played out in the fifth round of the 2022 Penrite ProMX Championship in Maitland. 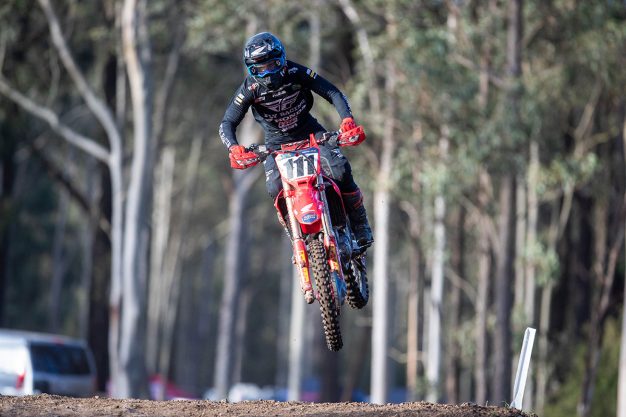 Todd Waters (Husqvarna Racing Team) – Third:
Even though it was another podium, I’m a little disappointed with the overall result as I had the fastest lap-time in both races, but little crashes cost me what could’ve been a better result. To be honest, I’m struggling with the balance of racing both the Australian Off-Road Championship and ProMX, so now when I race motocross I kind of feel like I’m trail-riding… I still feel good and I’m still in race-winning form, but I didn’t execute the result. I’m yet to win a race this year and I’m starting to run out of patience to make that happen! It’s time to start doing it.

Dean Ferris (Honda Racing) – Fifth:
I felt great in qualifying, I knew we had the pace and that we would be competitive. Unfortunately, we went the wrong way with some of the changes we made to the motorcycles in race one, and I also crashed which made things worse. In race two I moved to third and stayed there. The track was tricky as there wasn’t a lot of traction, so it was hard to make up ground. Losing the race by less than four seconds was trying on me and the team as we were right there.

Hayden Mellross (GasGas Racing Team) – Sixth:
I felt we had a good day. The overall results are staying very similar, but we’re improving every week and when you break the races down, everything’s getting better. In the first race we were only 10 or 11 seconds off first place and had a photo finish for fifth. We’re battling and need to keep working, because the top guys are hauling the mail out there. I want to podium and to win, both for myself and my team, and that will only happen if we keep putting our head down.

Aaron Tanti (CDR Yamaha Monster Energy) – First:
That one felt good. I was able to get my first round win at the last round at Gilman, now I have ticked another box and taken a round win with a 1-1 result, so it’s awesome to keep improving and achieving goals. I was pretty ordinary in practice and qualifying but because I have done the work during the week, I knew I would be fine once we started racing and that proved to be the case. It was a battle all day and for over an hours’ worth of racing, I had someone on me the entire time. Physically I feel really good, but mentally it took a lot of focus to stay in the moment, ride my best laps and get it done but I’m so happy that I was able to make that one happen today here with lots of friends and family to watch.

Kirk Gibbs (KTM Racing Team) – 11th:
Today went from very high to very low. I came into this round with really good prep and feeling like I had the bike working perfectly. We started well by qualifying fastest and I felt saucy in the first race – I got into the lead, but a lap later it all turned on its head. I overcooked a jump and landed into the face of another, so it blew my throttle hand off the handlebar and damaged my thumb. I’m not sure of the extent of it, but from there I was four-finger death-gripping it and made another error late in the race. That one incident turned what could’ve been a great day into a really bad day… I’ll go home and see where I’m at, then hopefully move forward there.

Jayden Rykers (Empire Kawasaki) – 14th:
It was a tough day to travel so far and end up with those results. The first moto wasn’t bad – I was able to stay with the front guys for the early stages, but need to work on maintaining that for the whole duration. In the second moto, something happened and I wasn’t able to continue. We don’t know what it is just yet, but we’ll come back stronger at Coffs Harbour. 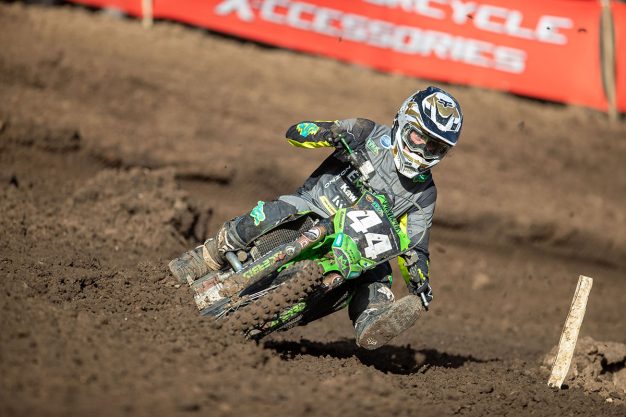 Haruki Yokoyama (Empire Kawasaki) – Fifth:
It’s a pretty big step for me to finish third and there are lots of positives to take from this weekend. Despite getting held up in the crash at the start of the second moto and having to come from the back of the pack, I felt I rode well – better than I did in the first race – and my lap-times were good. It was a good day for me to finish in the top five overall.

Jai Constantinou (Empire Kawasaki) – Sixth:
I’m really happy with my riding today, especially in that second race. I initially rode a bit tight as I hadn’t been up there all year, but I felt like I reset after a small crash and I rode like I know how to. It was good to put in a good result in that moto after a bit of an up-and-down day.

Wilson Todd (Terrafirma Honda Racing) – First:
We have three rounds left and I need to maintain focus, we haven’t won yet.

Dylan Wills (Husqvarna Racing Team) – 18th:
It was definitely a tough round, but at the end of the day you need to roll with the punches. It’s tough to cop on the chin, but I showed a lot of promise today and it was positive to lead for a share of that opening moto. The silly mistakes I made in moto one were on me, but moto two I felt really good, but ran into a technical issue that we haven’t quite diagnosed yet. We’ll find out what went wrong, keep working, then come back at Coffs to try and get it done.

Rhys Budd (Yamalube Yamaha Racing) – Seventh:
The was the hardest 7-6 for seventh overall I have ever had to do. To go twice, in the same corner, in each race is disappointing as I felt my riding today was really good. The positives are they my speed and fitness are in good shape and also that I was able to limit the points damage in the championship and retain second place in the series. But it also fuels the fire a little as I know I was good enough to race at the front today and challenge for the win, so I’m going to use that as motivation for next round and get back on the box at the end of the day.

Charli Cannon (Yamalube Yamaha Racing) – 23-25:
I’m not really sure where I would finish in MX2 as the rider depth is much better than in MX3 but it was good to be out there and racing with the guys and doing my best. I think I was as high as 20th in one of the races but made a couple of mistakes and I was also aware of not getting in the way when I got lapped right at the end of each moto. But the team tell me racing with the guys isn’t about the result and gave me a personal goal to achieve on the day., which I was able to do so that was good. I hadn’t ridden the Maitland circuit before, so it took me some time to adjust and get a flow going. The team were awesome again today and thanks to Nash for looking after me. Its also cool to have so many people come up and talk to me during the races and say they enjoy watching me ride- that means a lot to me.

Blake Fox (GasGas Racing Team) – 11th:
Considering everything, it was a reasonably positive weekend. I’ve got a niggling ankle injury from a practice crash 10 days ago and we had some bad luck early in both motos, which was a bit frustrating. I was happy with my starts today as they’ve previously been a bit of a weakness, so we have to capitalise on those in the coming rounds. As far as the injury goes, there’s a bit of ligament damage, but we’ll keep up the rehab and should be fine for the next round at Coffs Harbour.

Jesse Dobson (Serco Yamaha) – Second:
The opening few rounds have been a bit hit and miss for me, so it was good to put a full day together and ride well in both motos to get a good result. I struggled at Gilman as I had just come off an injury, so this was the first round in a while that I was able to put a decent block of riding and training together. I felt I had the speed to race with Wilson today and at times I was able to draw up on him only to see the gap get pulled back out a little. There were areas of the track that I though that if I could get close enough, I might be able to try a move on him but to his credit, he was able to maintain that gap and keep me at arms-length. Thanks to Ben and the entire Serco Yamaha team for another massive effort and lets keep this momentum rolling into the final three rounds.

Bailey Malkiewicz (Serco Yamaha) – Fourth:
The last few weeks have been tough as the initial thought was my season was done and I was in for surgery, but we were able to get some different advice, had the scans looked at and come up with a plan to keep my on track. I was far from my best today but the knee wasn’t too bad. I had some arm pump in the first moto and then I just got a bit tired in race two, both due to my lack of riding and training. Still fourth is pretty good considering and hopefully I can get back on the bike during the week and be a little more prepared come round six in Coffs Harbour.