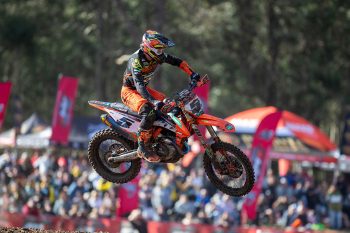 KTM Racing Team’s Kirk Gibbs will undergo scans on a thumb injury sustained from a damaging impact during the first moto at round five of the 2022 Penrite ProMX Championship at Maitland.

Gibbs started the event in fine form by topping the Top 10 Shootout to secure the first gate pick ahead of the two 25-minute motos.

The number five sliced his way to the front in the opening bout and was looking set to fight for a first moto victory of the season before he overcooked a jump, smashing hard into the face of the next one upon landing.

“Today went from very high to very low,” Gibbs explained. “I came into this round with really good prep and feeling like I had the bike working perfectly. We started well by qualifying fastest and I felt saucy in the first race – I got into the lead, but a lap later it all turned on its head.

“I overcooked a jump and landed into the face of another, so it blew my throttle hand off the handlebar and damaged my thumb. I’m not sure of the extent of it, but from there I was four-finger death-gripping it and made another error late in the race.

“That one incident turned what could’ve been a great day into a really bad day… I’ll go home and see where I’m at, then hopefully move forward there.”

Gibbs salvaged sixth in the opening race before a challenging race two saw him crash while circulating to score points, resulting in a DNF.

As the former national champion stated, it was a disappointing outcome to what was shaping up to be a promising day, ultimately finishing 11th overall.

Following Maitland, Gibbs is fifth in 2022 ProMX Championship standings, 69 points adrift from red plate-holder Aaron Tanti, as the series moves to Coffs Habour, NSW on 24 July for round six.