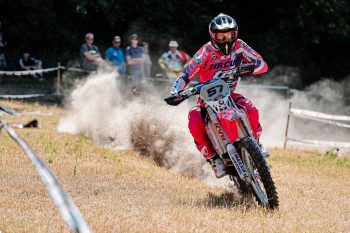 Australia’s Wil Ruprecht scored the EnduroGP victory during the second day of racing at round three of the WPTGlobal FIM EnduroGP World Championship in Italy.

Ruprecht and Red Bull KTM Factory Racing’s Josep Garcia traded blows for much of the round, exchanging fastest test times.

Unfortunately, Garcia crashed hard trying to claw back ground on Ruprecht during stage two, as the TM Racing rider ultimately stormed to take the win both outright and in Enduro2.

“After a good fight yesterday with Josep I’m happy to have put in a good ride today to take the win,” explained Ruprecht. “Of course, it’s not nice to have a competitor take a heavy hit [Josep Garcia], so I hope he’s all ok and good to go again. I’m happy with my riding, I had a few mistakes but we’re racing right on the limit to win. We’re back to Portugal next week, so I’m excited for that.”

Ruprecht now leads the 2022 EnduroGP World Championship standings by six points and has an 11-point buffer in Enduro2. Fellow Australian Daniel Milner (Fantic D’arpa Racing) was fifth in EnduroGP on the first day in Italy, and backed that up with a fifth on the second day. In E1, he finished each stage second and third respectively.