Perfect scorecard at round 12 for Vialle to retake MX2 lead. 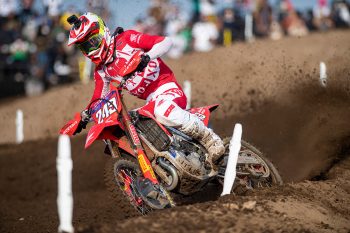 Team HRC’s Tim Gajser extended his 2022 MXGP World Championship lead in Indonesia with a double victory at Samota-Sumbawa, as Tom Vialle reclaimed the MX2 red plate with a 1-1 scorecard at round 12.

Gajser bettered Jorge Prado (Red Bull GasGas Factory Racing) on both occasions who went 2-2 to land second overall, as a 3-4 scorecard was enough for Ruben Fernandez (Honda 114 Motorsports) to complete the rostrum.

Australia’s Mitch Evans (Team HRC) delivered another season-best performance – sixth courtesy of 6-5 finishes, as Jed Beaton completed the round P12 after he crossed the line 10th in moto one, followed by a 14th place finish in race two.

Looking at the MXGP World Championship standings, Gajser leads by 125 points ahead of Prado, as Jeremy Seewer – who was ninth overall in Indonesia – sits third a further five points back. The number 28 led from start to finish to take the opening moto victory by 8.8 seconds ahead of Geerts, as Red Bull GasGas Factory Racing’s Simon Laengenfelder was third in the first bout.

Vialle got to the lead early in the race two but went off track and relinquished the position to Laengenfelder. On lap nine the KTM rider capitalised on a mistake from the number 516 to retake the lead and ultimately the race win.

Laegenfelder crossed the line second to land him P2 overall for the round, ahead of Thibault Benistant who completed the overall rostrum courtesy of 4-3 results.

It was a difficult race two for Geerts, crashing on multiple occasions en route to a P5 finish, which landed him P4 in Indonesia when coupled with second in moto one. Andrea Adamo (GasGas) completed the top five with 7-4 finishes.

As the red plate changed hands once again in what has been a thrilling MX2 title fight, Vialle leads Geerts by just four points entering round 13. Laengenfelder is third, 107 points from the red plate. 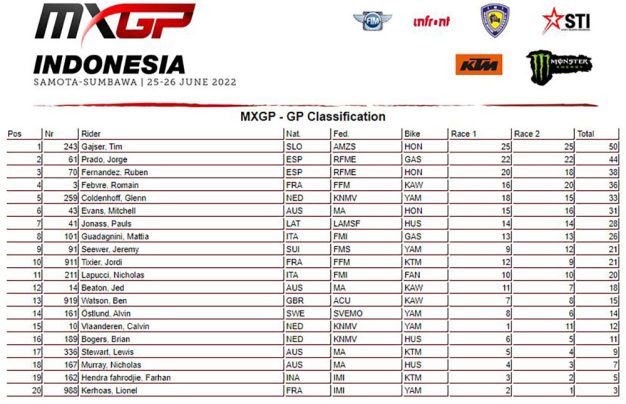 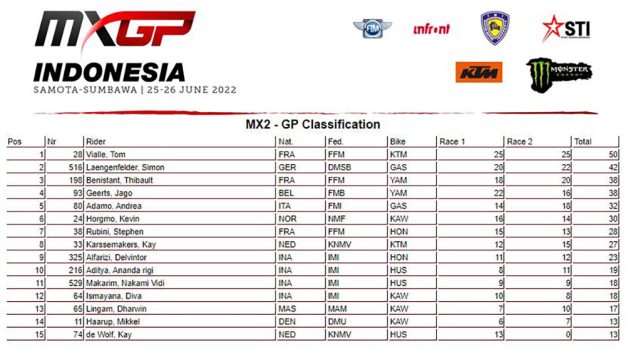