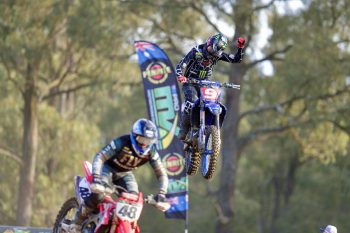 CDR Yamaha Monster Energy Racing’s Aaron Tanti has more than proven he’s worthy of the MX1 championship red plate after a convincing double-moto victory at the fifth round of the Penrite ProMX Championship at Maitland, NSW.

Tanti’s 1-1 scorecard saw him build his championship lead to almost 30 points as the second half of the championship began in earnest.

GO24 Racing’s Brett Metcalfe grabbed a near-perfect holeshot to the start of the opening MX1 race, but it was Matt Moss who made a couple of quick passes to take the early lead.

Top 10 Shootout winner Kirk Gibbs (KTM Racing Team) also made some early moves to work his way from fourth and into the lead, a position he held for half the race as series leader, Tanti, and Metcalfe stalked him.

A couple of small errors from the KTM rider saw Tanti jump to the lead, as Moss found pace late in the race to muscle his way back into second position.

Tanti took the win by almost four seconds from Moss, with Metcalfe completing the podium. Todd Waters worked his way to P4 after an average start, as early race leader from Gibbs suffered a slow late-race crash to finish sixth, behind Hayden Mellross (GasGas Racing Team).

Ferris capitalised with the holeshot off a very quick gate-drop that began the second MX1 moto, but he ran wide in the opening turn, allowing Metcalfe, Moss and Tanti to slide past.

Tanti wasted no time getting to the front of the pack in the early laps, then settled in for the rest of the race.

Behind him, Metcalfe lost positions early, allowing Ferris, Waters and Mellross to capitalise.

Gibbs, who sustained a thumb injury in the one of his crashes in the opening race, crashed hard midway through the moto and DNFed.

Up front, Tanti tried to control his margin over Moss as they worked their way through lapped traffic, taking a 0.8-second victory over Moss, with Ferris crossing the line in third.

Waters finished a hard-fought fourth, as Metcalfe rounded out the top five.

In the championship hunt, Tanti now sits on 214 points, comfortably ahead of Waters’ 188 and Metcalfe’s 186.

The sixth round of the ProMX championship will be held at Coffs Harbour, NSW on 24 July.