Direct updates from round five of the championship in New South Wales.

Follow the 2022 Penrite ProMX Championship with direct MX1 and MX2 updates from round five of the season at Maitland through Racefeed. 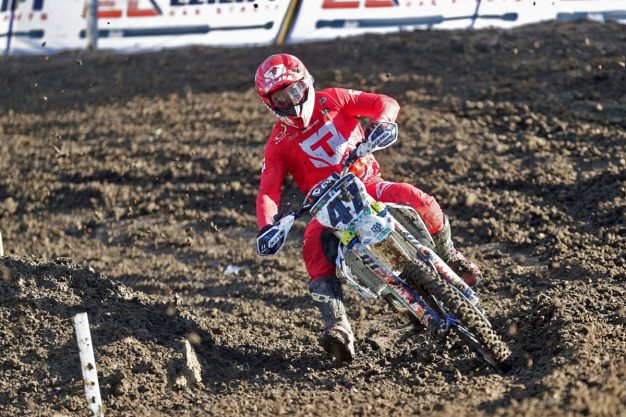 MX2 moto one:
Wilson Todd mastered the tricky track conditions to win the opening Pirelli MX2 moto. Husqvarna Racing Team’s Dylan Wills grabbed the holeshot ahead of the Terrafirma Equipment Sales Honda racer, and kept the points’ leader behind him for over half of the race, gaining valuable time at the front of the pack. With 10 minutes left on the clock Wills dropped his bike in a muddy rut, allowing Todd, a hard-charging Jesse Dobson (Serco Yamaha) and Empire Kawasaki’s Haruki Yokoyama past. Todd slowly extended his lead over Dobson, taking the win with a five-second lead over Dobson, with Yokoyama finishing an impressive third. Bailey Malkieiwcz (Serco Yamaha) came home in fourth on his return to racing, followed by a fast-finishing Noah Ferguson (GasGas). Hugh MacKay (Yamaha) finished the race in sixth, ahead of Rhys Budd (Yamalube Yamaha Racing), who fell on the opening lap. Blake Fox (GasGas Racing Team), Ben Novak (Honda) and Jai Constantinou (Empire Kawasaki) rounded out the top 10. Wills crashed again later in the race to finish outside of the top 10.

MX1 moto one:
CDR Yamaha Monster Energy Racing’s Aaron Tanti secured the opening MX1 race win. GO24 Racing’s Brett Metcalfe grabbed a near-perfect holeshot to the start of the opening MX1 race, but it was BBR 102 Motorsports Yamaha’s Matt Moss who made a couple of quick passes to take the early lead. KTM Racing Team’s Kirk Gibbs also made some early moves to work his way from fourth and into the lead, a position he held for half the race as series leader, Tanti, and Metcalfe stalked him. A couple of small errors from the KTM rider saw Tanti jump to the lead, as Moss found pace late in the race to muscle his way back into second position. Tanti took the win by almost four seconds from Moss, with Metcalfe completing the podium. Husqvarna Racing Team’s Todd Waters worked his way to P4 after an average start, as early race leader from Gibbs suffered a slow late-race crash to finish sixth, behind Hayden Mellross (GasGas Racing Team). Dean Ferris (Honda Racing) fell early and recovered to seventh. P8-10 were filled by Jayden Rykers (Empire Kawasaki, Joel Wightman (Yamaha) and Dylan Wood (KTM).

MX2 moto two:
Wilson Todd snatched the holeshot off the start of the second MX2 race and was never challenged. A first turn crash by Budd held up a host of the championship pretenders, allowing Todd plain sailing to a comfortable five-second win. Dobson, who was briefly tangled with Budd in the early crash, made some quick passes on the early laps to work his way up to second. However, try as he might, he couldn’t close the gap to the Honda rider. The final podium position was hotly contested, but ultimately went to Empire Kawasaki’s Jai Constantinou after Wills was forced out with a disappointing mechanical DNF in the latter stages of the race. Yamaha privateer Jayce Cosford held off Noah Ferguson for fourth. Budd recovered well to finish sixth, ahead Kaleb Barham (Husqvarna), Malkiewicz, Mackay and Yokoyama.

MX1 moto two:
Dean Ferris capitalised with the holeshot off a very quick gate-drop that began the second MX1 moto, but he ran wide in the opening turn, allowing Metcalfe, Moss and Tanti to slide past. Tanti wasted no time getting to the front of the pack in the early laps, then settled in for the rest of the race. Behind him, Metcalfe lost positions early, allowing Ferris, Waters and Mellross to capitalise. Gibbs, who sustained a thumb injury in the one of his crashes in the opening race, crashed hard midway through the moto and DNFed. Up front, Tanti tried to control his margin over Moss as they worked their way through lapped traffic, taking a 0.8-second victory over Moss, with Ferris crossing the line in third. Waters finished a hard-fought fourth, as Metcalfe rounded out the top five. P6-10 were filled by Mellross, Wightman, Wood, Corey Watts (Honda) and Joel Evans (Honda).