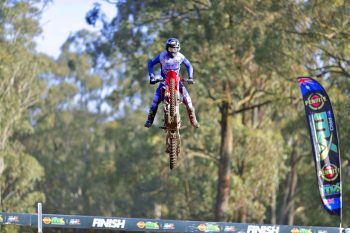 Terrafirma Equipment Sales Honda Racing’s Wilson Todd has continued to stretch out his already sizeable MX2 lead after another flawless 1-1 result at the fifth round of the 2022 Penrite ProMX Championship at Maitland, NSW.

Todd’s was the dominant force all day, and was able to control the race from the front as his nearest rivals fought for the minor positions.

Husqvarna Racing Team’s Dylan Wills grabbed the holeshot ahead of the Terrafirma Equipment Sales Honda racer, and kept the points’ leader behind him for over half of the race, gaining valuable time at the front of the pack.

With 10 minutes left on the clock Wills dropped his bike in a muddy rut, allowing Todd, a hard-charging Jesse Dobson (Serco Yamaha) and Empire Kawasaki’s Haruki Yokoyama past.

Bailey Malkieiwcz (Serco Yamaha) came home in fourth on his return to racing, followed by a fast-finishing Noah Ferguson (GasGas).

Hugh MacKay (Yamaha) finished the race in sixth, ahead of Rhys Budd (Yamalube Yamaha Racing), who fell on the opening lap.

Blake Fox (GasGas Racing Team), Ben Novak (Honda) and Jai Constantinou (Empire Kawasaki) rounded out the top 10. Wills crashed again later in the race to finish outside of the top 10.

Wilson Todd snatched the holeshot off the start of the second MX2 race and was never challenged.

A first turn crash by Budd held up a host of the championship pretenders, allowing Todd plain sailing to a comfortable five-second win.

Dobson, who was briefly tangled with Budd in the early crash, made some quick passes on the early laps to work his way up to second. However, try as he might, he couldn’t close the gap to the Honda rider.

The final podium position was hotly contested, but ultimately went to Empire Kawasaki’s Jai Constantinou after Wills was forced out with a disappointing mechanical DNF in the latter stages of the race.

In the championship standings, Todd has stretched out an 83-point lead over Budd (243 points versus 160 points), with Malkiewicz another 11 markers back (149). 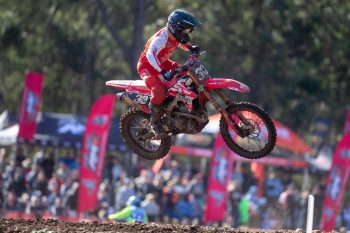 Honda rider Thynan Kean broke through for his first-ever round overall with an impressive 2-1 victory in the MX3 class.

In the championship, Minear extended his lead after his nearest rival, Cambell Williams (Honda) suffered a mechanical DNF in the second race. Minear has 196 points, with Jack Mather 17 points behind in second overall (173 points), with Williams third overall on 171 points. 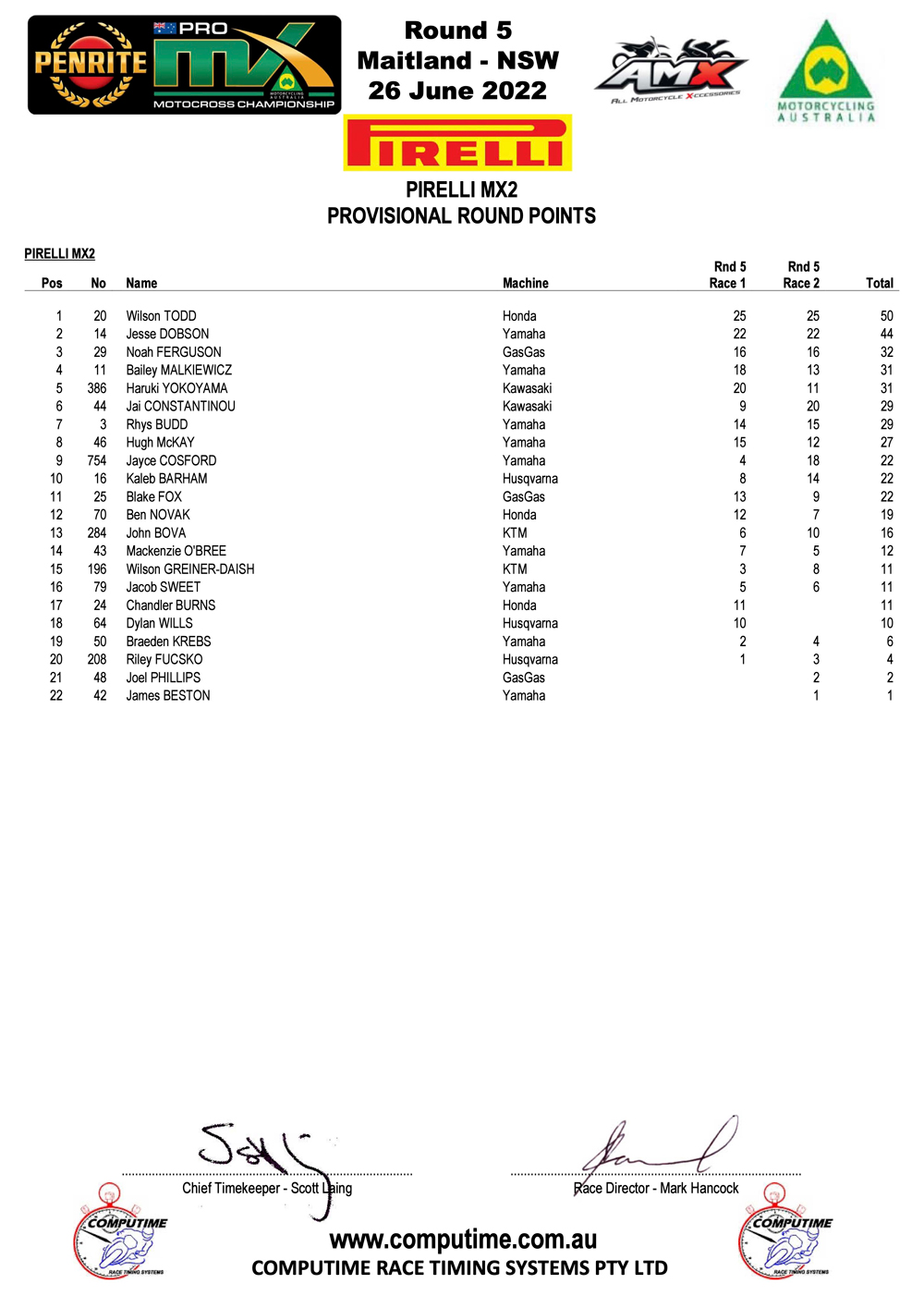 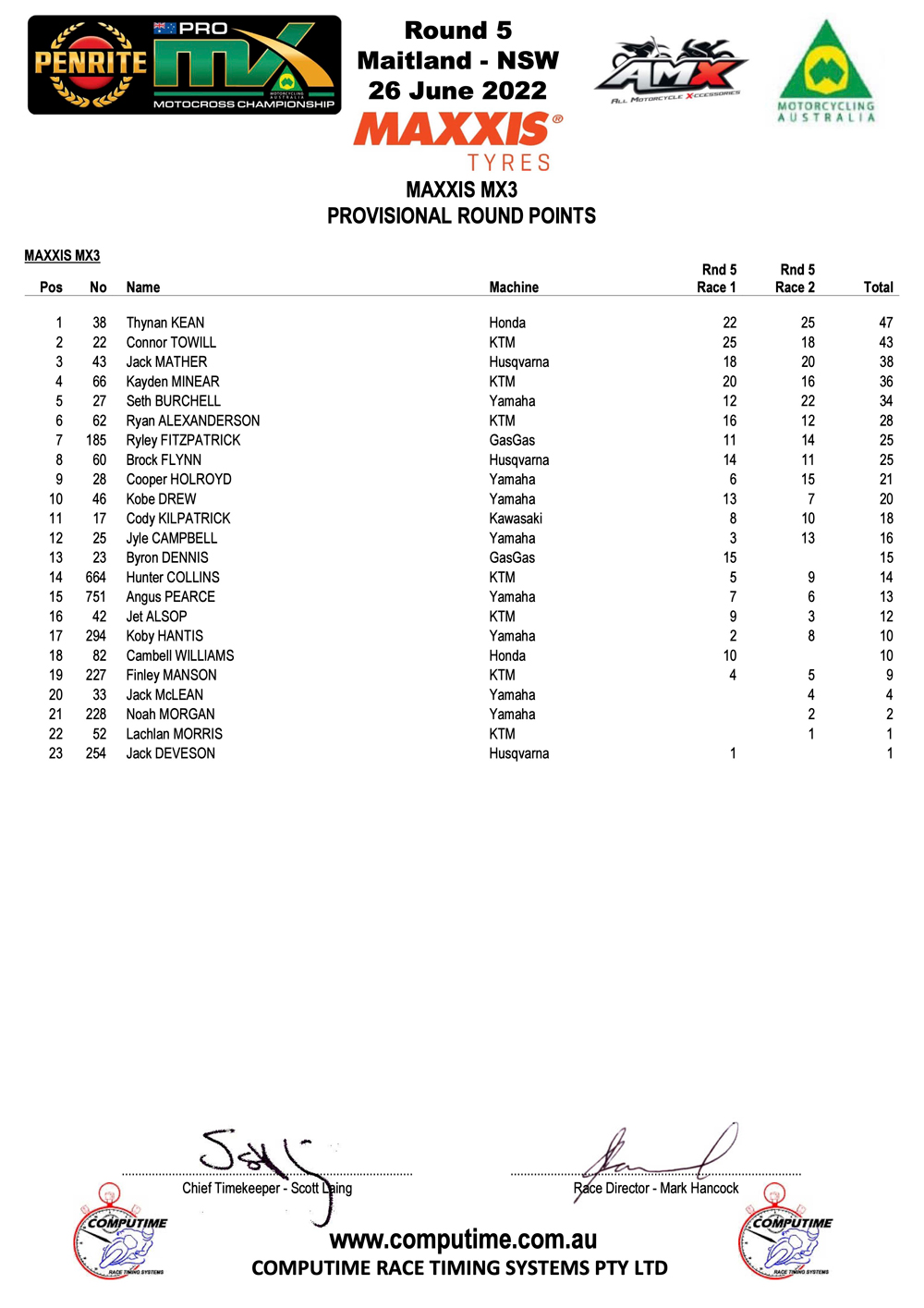