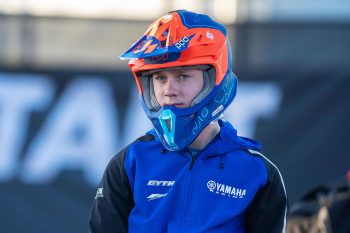 Yamalube Yamaha Racing’s Alex Larwood has been forced to the sidelines ahead of Penrite ProMX at Maitland this Sunday, with nerve damage restricting mobility and feeling in his left shoulder.

Larwood’s absence from round five is a crushing blow to his MX2 title aspirations, currently second in the points despite riding with a broken collarbone in Mackay and having a chain snap during moto two at Gillman.

“I had a crash the week after Gillman and hit my left shoulder and did some nerve damage to it,” Larwood told MotoOnline. “At the moment, I can’t really lift my arm above my head or waist height. None of the nerves are torn or anything, they are just sort of bruised and a bit damaged, which is not letting my mobility go above my head or anything.

“All of the nerves are still attached, but I had no feeling in my arm for a week or two and it is sort of just starting to come back now. My shoulder is too weak for me to ride, so I’ve had to pull the pin on this weekend unfortunately. I’m sitting in second in the championship, I’m pretty bummed, but we are in a sport where there’s always injuries and that, so it’s the way it is at the moment.”

While Larwood is yet to win a moto this season, he’s shown on numerous occasions to be the leading rider to challenge Honda Racing rider Wilson Todd’s dominance in MX2. His latest injury is unrelated to any previous incident.

The Yamalube Yamaha Racing team will have two bikes on-track in MX2 this weekend, however, as Women’s championship leader Charli Cannon will be stepping up to the class alongside Rhys Budd at selected rounds in between her MXW series commitments with the team.