Teenager has surgery scheduled for both ACL and MCL damage. 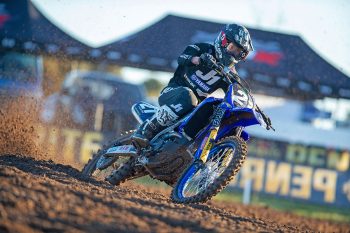 Ruptured knee ligaments will mean that the 2022 Penrite ProMX Championship season is over for WBR Yamaha Bulk Nutrients MX2 class rookie Ryder Kingsford, ruled out for the series’ second half altogether.

After finishing second in last year’s MX3 standings, the 17-year-old stepped into the professional ranks this year and has been a revelation with consecutive podium finishes at Wodonga and Gillman.

The disappointing news surfaced late this week that he has ruptured both his ACL and MCL, now due to undergo surgery next month and will then turn his attention to the 2023 season.

“I just came into a corner and just washed the front and my leg got caught in the bars… my leg just snapped straight left,” Kingsford told MotoOnline. “Instantly I knew something was wrong and then got some scans and found out I had a ruptured ACL and MCL. I’ve got surgery booked in two weeks’ time to get this all sorted and back on the road to recovery, aiming to be back for next season.”

Following a top-five result on debut at Wonthaggi, followed by a more difficult round in Mackay and then claiming third overall in both Wodonga and Gillman, Kingsford sits P5 in the point-standings leading into Maitland this weekend.