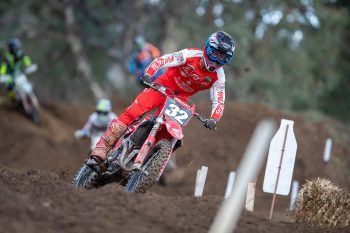 MX2 standout Liam Andrews will miss the fifth round of the 2022 Penrite ProMX Championship at Maitland after undergoing surgery on his foot that he broke in two places.

Andrews switched to Honda for his 2022 assault and has progressed throughout the season, especially in the last two rounds at Wodonga and Gillman, finishing fourth and fifth overall.

The injury marks a disappointing blow for the promising young talent who was knocking on the door of an MX2 podium. Despite the hurdle, the number 32 remains determined to come back stronger following the operation yesterday.

“Absolutely gutted to be sharing this news with everyone, I was competing at a local race about a week ago and unfortunately came together with another rider, I put my foot out to save myself ultimately breaking it in two places,” Andrews shared. “Had surgery yesterday so now on the road to recovery.”

“I was riding really smart this year slowly building at each round of the ProMX and was really happy with my progression. This is just a small bump in the road and I’ll be back better than ever, thanks to everyone for the continued support.”