YZ250F talent to compete at round five after knee injury. 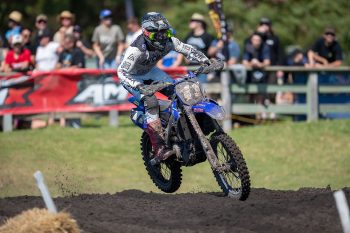 Serco Yamaha’s Bailey Malkiewicz is set to return for the fifth round of 2022 Penrite ProMX at Maitland this Sunday after he sustained an MCL and PCL tear in a first moto fall at Gillman.

The injuries to his left knee effectively brought an end to Malkiewicz’s MX2 charge in South Australia, however, to his credit, the number 11 did attempt to line up and race the second moto.

“I came back down to home in Victoria to get a second opinion on my knee, and yeah it was just MCL and PCL was torn,” Malkiewicz said to MotoOnline.

“I spent the last few weeks doing physio and strengthening my knee back up, feeling not too bad and had a ride the other day. Got the clearance I was looking for, good to race.”

A highlight of Malkiewicz’s 2022 season to date is Wodonga where he scored his first ProMX MX2 overall victory and remains the only rider other than Wilson Todd to have won a round in the category this year.

Despite a zero points haul from round four, Malkiewicz is fourth in the championship, only 14 points from Alex Larwood in second who had his own share of misfortune in South Australia with a broken chain in moto two.