At 20 years of age, Korey McMahon is arguably the busiest dirt bike racer in Australia. Be it the Australian Off-Road Championship (AORC), the Australian Four Day Enduro (A4DE), ProMX or the Finke Desert Race, the GasGas racer has lined up for them all this year and exceeded expectations every time. He features in our latest Profiled.

Until 2017, McMahon focused on junior motocross, but in 2018 – the same year he finished eighth at the FIM Motocross Junior World Championship at Horsham – he decided to try his hand at off-road racing and won the J4 title at his first attempt. In 2019, he earned an impressive third in the EJ field.

A year later he’d win that EJ title in the shortened AORC championship, then, with some added support from GasGas stepped up to the E2 class last year for the only two rounds of the series at Golden Beach, ultimately finishing sixth. Last year, McMahon also contested the MX2 class of ProMX and finished 10th overall, plus tried his hand at Finke and claimed 17th position outright.

“I’m one of those guys who just loves racing dirt bikes, no matter what the discipline,” McMahon explains. “I don’t enjoy sitting on my butt or just training for the sake of it, so I take every opportunity to go racing. Up until this year I was still working full-time and flying to all the races while my parents drove my bikes there. It was pretty gnarly, looking back on it.” For 2022, GasGas ramped up its support and it’s been a game-changer for the whole family. While McMahon and his mechanic now drive to the races during the week, his parents fly up for the weekend.

“They’re always still at the races. Mum’s still the head chef and that makes my job a lot easier,” he laughed. “There’s nothing better than a mum-made meal after a big day of racing.”

The extra support from GasGas has also been telling in his results. Racing the E1 class, McMahon finished second to Kyron Bacon both days at the mud-drenched opening weekend at Cherrabah and placed a remarkable fourth outright. After two years of limited racing due to Covid, the results surprised many – himself included.

“I went into Cherrabah not really knowing where I’d be outright, but I was really stoked with how far I’d come. It proved that what I’m doing and how I’m training is getting me somewhere. I’ve always been a quiet achiever in the corner and never gloated or had real support – we’d turn up to races as a family because we love it.

“Because I worked full-time, I felt like I always had to push really hard and ride over my head to prove myself. Now that I’m racing professionally, I can just focus on my riding and not take those risks.”

As well as consistently finishing second in the E1 class so far this year, McMahon raced MX2 at both the Wonthaggi and Mackay rounds of ProMX, despite just finishing a harrowing two days of racing AORC prior in Mackay.

A clash of dates with Australian Four-Day Enduro (A4DE) training commitments and desert-testing for Finke saw him make the hard call to not line up for either Wodonga or Gillman, but you can expect him to be behind more ProMX gates before the season’s out. 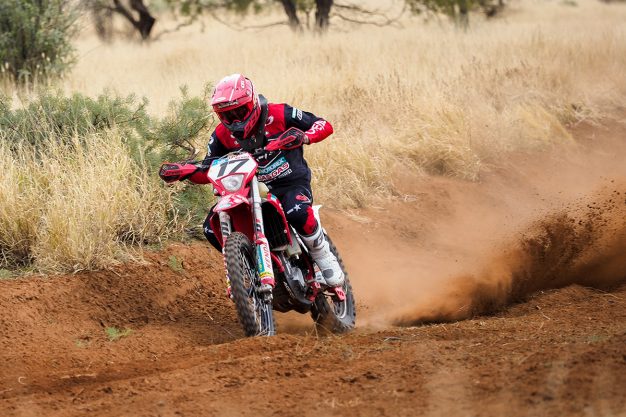 Capping it off, McMahon stunned many when he finished an impressive fourth outright at this year’s Finke Desert Race, in just his second attempt.

“There were no expectations for me to do well there,” he added. “I was hoping for a top 10 result and I put in a lot of work – including spending a month with just my pop in Alice, which was quite hard – but it was a big surprise to finish that high up. Finke is by far one of the scariest races I’ve ever done and it takes a lot to get your head around. When you’re doing 150km/h over rock-gardens, it’s gnarlier than you can ever imagine.”

Later this year McMahon will head to the International Six Days Enduro (ISDE) in France as part of Team Australia. He’ll step up to the E2 class on a 350 and it’s an opportunity he’s really looking forward to: “It’ll be my first time representing Australia in enduro racing and I just want to go there, learn as much as possible, and see where I’m at on the world stage.”

As for the future, McMahon is keen to put in another year in E1, but the ultimate goal is to follow in the footsteps of Toby Price and Daniel Sanders to become a racer on the international rally stage.

“The big dream is to obviously win a world title like every little kid,” he continued. “It’d be nice to chase the desert stuff like Chucky’s done. The road he’s taken is the dream I’ve always dreamed of… doing the Dakar one day will be a dream come true.”