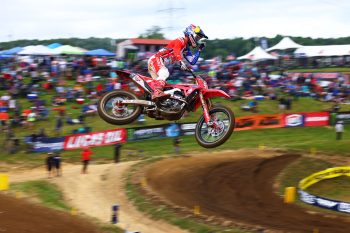 The opening portion of moto one was led by Seth Hammaker (Monster Energy Pro Circuit Kawasaki), before Michael Mosiman (TLD Red Bull GasGas) took his turn at the front, only to make an unforced error just past the halfway mark.

That enabled Hunter Lawrence to take control at the front, which is where he would remain by going on to win by 4.425s from younger brother Jett, who in turn climbed his way from outside of the top-five into the runner-up position.

Third was a strong performance from Jo Shimoda (Monster Energy Pro Circuit Kawasaki), directly behind Lawrence and ahead of Hammaker, while Mosiman eventually finished in fifth.

The second 250 class moto marked the on-track battle we’ve been waiting for as the Lawrence brothers went head-to-head. It was Hunter who led the first six laps before Jett took charge for a few, but then Hunter countered for to lead a couple more of his own.

Defending champion Jett ultimately took control on lap 12 and remained there when it counted – crossing the line just 0.553s ahead of Hunter for the moto win and overall on countback to make it four-straight this season.

Over 35 seconds back, Cooper rebounded for third and ahead of Mosiman in fourth, but there in P5 was enough for Shimoda to seal a place on the podium overall. Positions six through 10 in the moto included Hammaker, Hampshire, Vohland and Brown.

In terms of the points, Jett Lawrence maintains a 12-point advantage over Hunter leading into RedBud. It was a dominant opening 450MX moto for Team Honda HRC’s Sexton as he powered away to a winning margin of 11.652s ahead of Tomac and with Jason Anderson (Monster Energy Kawasaki) third.

Sexton jumped out front from the outset and led by almost 20 seconds in the middle stages, before controlling things from there. Meanwhile, Tomac got the better of Anderson – who made a mistake while in P2 earlier on – for the runner-up result, and Justin Barcia (TLD Red Bull GasGas) put in one of his better rides for the year so far for fourth.

It was the battle for fifth that stole much of the spotlight, with the fast-starting Joey Savatgy (Monster Energy Kawasaki) edging Ryan Dungey (Red Bull KTM) and Ken Roczen (Team Honda HRC) from 11th on lap one – the trio cross the finish in formation following an intense contest.

Moto two of the 450 class lit up when Dungey scored the holeshot and led the opening lap, before Roczen then moved by for his share at the front. Sexton then briefly took his turn at the head of the pack, but Roczen was able to counter and Tomac soon stormed past all of them at the midway point.

Tomac pulled away to a 3.558s win, which resulted in his first overall since joining Yamaha ahead of Sexton and Roczen, who got by Dungey on the final lap to deny him of a moto and round podium.

Fifth was enough for Anderson to land a podium overall, while the top 10 included Craig, Barcia, Savatgy, Shane McElrath (Rockstar Energy Husqvarna) and Marchbanks. Cairoli was again a non-finisher after tweaking his knee in the first outing.

The round podium was topped by Tomac over Sexton and Anderson, with Sexton holding a 13-point buffer in the standings leading into next weekend off and then RedBud on Saturday, 2 July.