Return to the top for Gajser at MXGP of Germany 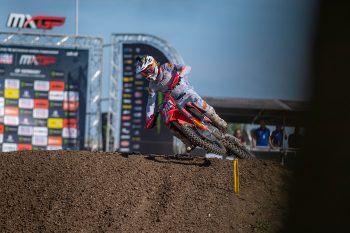 It was a return to the top for Team HRC’s Tim Gajser at the 11th round of the 2022 MXGP World Championship, the red plate-holder extending his advantage, as Monster Energy Yamaha MX2’s Thibault Benistant broke through to claim a maiden overall victory in the class.

Gajser grabbed the holeshot in race one and didn’t look back, ultimately taking a 5.8 second victory over Pauls Jonass (Standing Construct Husqvarna Factory Racing) as Jeremy Seewer (Monster Energy Yamaha MXGP) was third. Romain Febvre (Kawasaki Racing Team) made an impressive comeback after missing the opening 11 rounds this year due to injury to finish fourth.

In race two, Seewer secured the holeshot for the first time this season and went on to take the moto victory, with Gajser’s second enough to grab him the overall ahead of the number 91. Jorge Prado (Red Bull GasGas Factory Racing) was third in the second bout which elevated him to third overall for the round.

Notably, Maxime Renaux did not contest Sunday’s races after fracturing multiple vertebrae in Saturday’s qualifying races, and Febvre capped off his return fifth overall with a P7 in race two.

Australian Mitch Evans (Team HRC) finished a strong P6 in the second outing, which landed him seventh overall after finishing eighth in race one. Jed Beaton (F&H Kawasaki) was 14th for the round with a 14-14 scorecard.

Gajser has a 99-point lead in the championship ahead of Seewer, with Prado third as Renaux’s absence dropped him to fourth, 120 points from the red plate. Thibault Benistant broke through to secure his first MX2 overall with a 3-1 scorecard at Teutschenthal, as disaster struck Red Bull KTM Factory Racing’s Tom Vialle in the second moto.

Vialle won the opening race ahead of title-rival Jago Geerts (Monster Energy Yamaha MX2) and Benistant, and grabbed the holeshot in race two before a technical issue forced him to retire from the race.

Benistant went on to win the second bout, ahead of Geerts who landed P2 overall, and Mikkel Haarup (F&H Kawasaki) who was third in the second race, and third overall at round 11.

Following the MXGP of Germany, Geerts regained control of the red plate to lead Vialle by eight points, with Simon Laegenfelder (Red Bull GasGas Factory Racing third, a further 99 back heading into the 12th round of the season at Indonesia on 26 June. 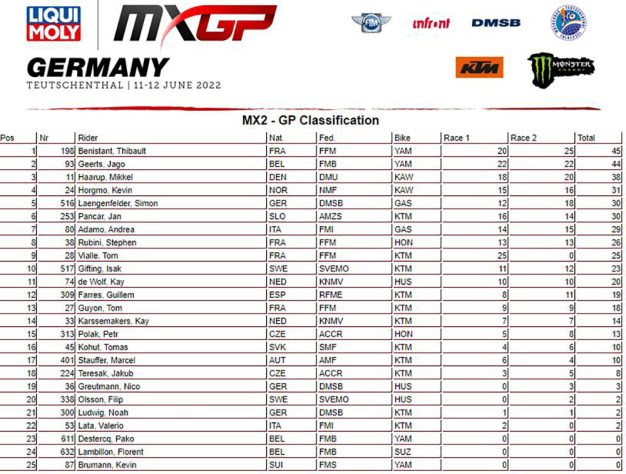