Mendooran the new venue for AORC rounds five and six 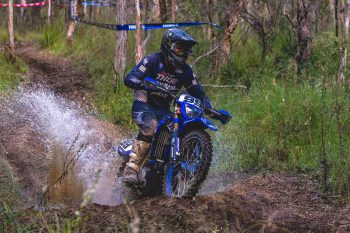 Overwhelming and poor weather conditions have resulted in a venue change for rounds five and six of the 2022 Yamaha Australia Off-Road Championship (AORC) to Mendooran, NSW.

The decision was made to shift from the original Kyogle host property after careful consideration from various stakeholders, but the rounds will still take place on the scheduled 16-17 July weekend.

A statement from Motorcycling Australia read: “The 2022 Yamaha Australian Off-Road Championship (AORC) presented by MXstore advises after extensive consultation with Motorcycling Australia and multiple clubs; the Kyogle Dirt Bike Club and the Mudgee Motorcycle Club, it has been decided that due to persistent and overwhelming poor weather conditions at the intended Kyogle host property, a venue change is required.

“While it is acknowledged that the event is some six weeks away, it has proved impossible to fully access the venue to make adequate preparations for the 16-17 July event.

“Fortunately, an alternative (sandy terrain) venue has been found and rounds five & six will take place on the scheduled weekend of 16-17 July at Mendooran, NSW.

“Motorcycling Australia and AORC management would like to acknowledge the efforts of all clubs involved to ensure that the 2022 Yamaha Australian Off-Road Championship presented by MXstore can continue on schedule.”