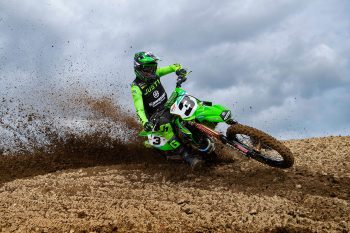 After months of recovery, Kawasaki Racing Team’s (KRT) Romain Febvre is set for a comeback at the 11th round of the 2022 MXGP World Championship this weekend in Germany.

Febvre has been sidelined from competition since he fell heavily in the 2021 Paris Supercross and sustained a double fracture of the tibia and fibula in his right leg.

Following multiple operations, the number three began riding again in May, however, felt with the pain levels then it was too early to consider a date to be back racing.

The confirmation of his return at the MXGP of Germany comes one month later, with last year’s vice-champion entering the upcoming round open-minded in his comeback

‘There has been a lot of bad news in the past months but now I have a good one and I’m so happy to announce that I will be back behind the gate this weekend,” explained Febvre.

“I didn’t ride that much yet as I have only been training for two-and-a-half weeks so far, but the feeling with the bike is already really good so it’s time to be back racing. As I already explained previously the doctor told me that the pain will guide me and, even if sometimes I feel some pain, that’s acceptable.

“I go to Germany without any specific goal as I didn’t ride with any other top riders in recent weeks; I would have liked to ride with Ben [Watson] but after his crash in Spain he was not able to practice last week.

“We never stopped working on my fitness programme, even when I wasn’t able to ride the bike, so physically I am ready and I think that my speed will be ok, but for sure it will be more difficult at first to maintain the speed for the entire duration of the motos. But we must start somewhere.

“I’m not yet at 100 percent but as I have a good feeling on the bike and as we had some good training sessions it’s time to go and it was better to be back in Germany rather than wait for Indonesia.

“We didn’t want to return overseas; it’s much better to do so in Europe even if Teutschenthal is not the easiest track for a comeback. But I have some experience and know what is required.”