Lack of race fitness takes a toll on Beaton at Ernee 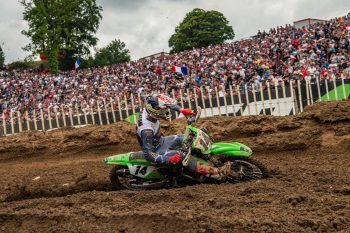 Australia’s Jed Beaton continues to build in his MXGP return from a shoulder injury, a lack of race fitness ultimately proving costly in the closing laps of each moto in France.

The F&H Kawasaki rider was sidelined ahead of the MXGP of Latvia as a result of a damaged shoulder sustained in the second round of the 2022 series at Mantova.

Beaton missed three GP’s as he recovered, later returning at the MXGP of Spain for round nine of the 2022 world championship where he was P16 overall.

Despite needing to still build back race fitness, Beaton landed an improved 13th overall with a 13-13 scorecard at Ernee’s round 10, demonstrating outright speed to fight for a top 10.

“I started off good for twenty-five minutes both motos but the last ten minutes were difficult each time,” Beaton said. “I missed a couple of GPs with my shoulder and it showed as I’m still lacking race fitness, but it was another step in the right direction; I’m showing at the start of the race what I can do and now I have to build fitness back up to take it to the end of the moto.”

2022 marks Beaton’s first season in the premier MXGP class after ageing out of MX2, and he proved immediately that he can be quick on a 450 as he finished sixth overall at the season-opening MXGP of Great Britain. His next outing will be this weekend at the Liqui Moly MXGP of Germany at Teutschenthal.