Results not a reflection Evans’ overall speed in France 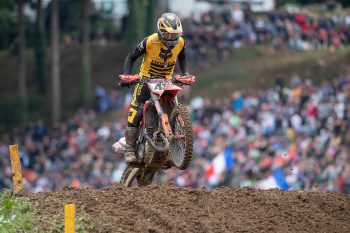 It was a challenging round 10 of the 2022 MXGP World Championship in France for Mitch Evans with a pair of crashes limiting the Team HRC rider to 15th overall despite displaying the pace to finish much higher.

Race one saw Evans brought down in a multi-rider turn one pileup and was unable to score any points after showing great speed in a charge back through the field.

Another fall on lap two of moto two relegated Evans to 16th, the determined Australian using the remainder of the race to work his way back to 10th and run a pace that would have been good at least for a top-eight without the fall.

“Once again it is a case that my results didn’t reflect my overall speed,” explained Evans. “I was involved in the first turn crash in race one and by the time I was able to remount, I was right at the back of the field. Midway through the race, I saw the blue flags, so I let the leaders go by and slotted in behind the front two.

“From then on, I kept right behind them, matching their laptimes and feeling really comfortable while doing so. Unfortunately, it wasn’t enough to get me into the points but it gave me a confidence boost that I was able to run at the front.

“In race two, I was again involved in a crash on the first lap and had to make my way up from 16th place. By the time I received the chequered flag, I was in the top 10 so that was a good comeback but I still know I’m capable of getting a much better points total.”