Jett and Hunter and their 250MX lockout at Fox Raceway.

It was a dream start for Team Honda HRC at the opening round of the Lucas Oil Pro Motocross Championship at Fox Raceway, where the Australian Lawrence brothers stole the show in 250MX as they locked out 1-2 results in each of the motos and overall. In a special edition of Input, hear from both Jett and Hunter on their achievements to open season 2022 outdoors. 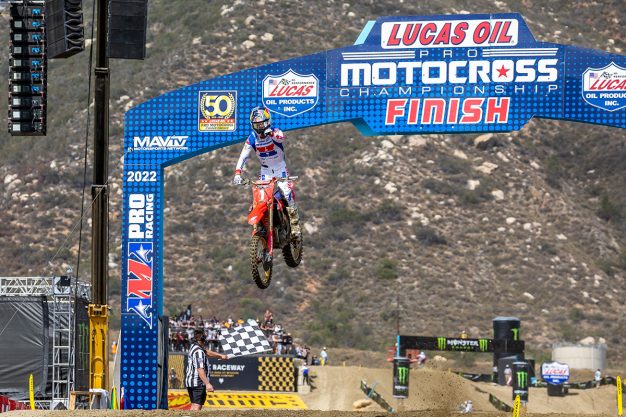 Jett, you got a second place start in both motos, looked so close in that second one…

I was pumped, going second, second on both of the starts, that’s like a holeshot for me, I feel like. First, obviously I had Justin [Cooper] and at the start, like you said, I was kind of a little bit playing around, just kind of seeing where I could get him and then I found the spot. I was getting him in that same spot the last three races we’ve had there. It’s kind of like my go-to spot almost for passing Justin. Then [Nick] Romano was able to find a few laps behind, but I think it was maybe fourth or fifth, I was able to find a spot and then capitalise on it. Then from there, it was almost difficult because I had to set a pace where I could last the whole race and not make any mistakes. It was hard because I had no one else, I got a bit of a gap and then you’re riding by yourself. So, you kind of get a little bit bored and that stuff and I made a couple of mistakes but was able to bring it home safe.

Once you had the gap, how hard was it to concentrate then? You’re trying to maintain pace, trying to hit your lines. You don’t want to cross the line by any means and make a mistake, so almost just as hard to concentrate when you’re out there by yourself?

Yeah, for sure. I always would know where most people are. I could see Jo [Shimoda] and Hunter in that second one, so I kind of always have that still bit pushing because obviously I can see where they’re at and when I gain on them, so I can kind of set my pace off of them and kind of just go, ‘okay, I can do this pace and it can stay the same’, or when they pull me it’s like, ‘I’ve got to get going again’. It definitely gets a little boring sometimes, especially when we do it early. That’s how all the race feels so long, like the first one with Hunter and I because we’re clicking off similar lap times. Then I was getting bored, I’m pretty sure he was also, but I’m pretty sure he had RJ [Hampshire] right there, he said. It was good.

I’m not sure if you looked at the lap times or had a chance to yet. Your consistency was incredible, lap after lap after lap for 30 minutes, extremely impressive. To watch you do that and work your way through traffic, when we look back at it, it looked almost effortless. Did it seem that way at the time?

I mean no, for you guys it looks effortless, but I’m definitely giving it a lot. Focusing a lot and really focusing on hitting my lines and finding my lines and then finding the flow of those lines. That’s what I have fun with because I can find a good flow and then I can just kind of play with the track and go from there.

Jett and Hunter, it’s a huge day for Honda. I was just wondering what it’s like for both of you to come back and see the smiles on the team and know that you guys both gave them that result?

Hunter: It’s incredible, I don’t know if everyone looks at it the way we do, but it’s like those guys, their whole life is revolved around us, in a way. The race mechanics are always on the road during the season, and the suspension guys. Everyone in the team is working to better us. So, to win not only for us or get podiums and do well, it’s just as much for them as it is for us. It’s awesome. We care about them so much, and they’re stoked, so, it’s cool.

Jett: Basically, what Hunter said… mainly they sacrifice so much to help us and it motivates us as riders to make sure we do them right and the team. I think it’s just awesome. Even as brothers to go one and two it’s even cooler because that’s what we dream about. It’s like, it would be so cool. I remember talking about it, I can’t remember when, but we were like ‘that would be so sick and an overall if we went 1-2’. We didn’t really care who won! It would be cool if Hunter went one and then I went second or vice-versa, so it’s kind of cool, it’s a bit of a goal that we’ve had in our head as brothers with racing. Obviously, the team is super-pumped and they were able to do it in 450 also, so it was an awesome day for Honda. Hunter, you had your work cut out for you both motos, I believe about a sixth-place start in the first moto. Two or three laps a little battle, put your head down and the bottom line was you looked very cool and collected today, very focused. Didn’t see any squirrelly mistakes of any kind whatsoever, but it seemed like you were just on a mission and absolutely letting it unfold in front of you.

Yeah, I tried to learn a little bit from last year. Last year I was out of the gate and the first few laps just really trying to push and make a pass everywhere I could – I ended up crashing both motos and then obviously starting off the moto on a really bad foot. I have confidence in my speed and fitness and I tried to let the race come to me. They had a little water put down in some slippery areas. The first few laps obviously you want to holeshot and get going a little bit, but we did okay. By the time I got into second, Jett had a pretty good lead and I just tried to hit my marks.

What was the sense of urgency when Justin Cooper gets the holeshot and you see Jett take right after him? It looked like you were just kind of toying around a couple laps or maybe following him. What was the sense of urgency not to let those guys get away and to make a couple quick moves, but yet knowing that the track was a bit slick, and it was easest time to make a mistake? How tough was that?

Very, there were two title contenders up front and I think it was Seth [Hammaker] and I can’t remember who else was in front of me, I’m like, ‘I’ve got to get these guys as fast as I can’. Just try not to let them get away. They got a way a little bit, then I got Justin. Same thing in the second moto, I just tried to go as fast as I could. The track was tough, there were so many lines, but it was really one-lined in a sense that the fastest line around the track was, so it was tough.

A fantastic start, basically allowed everything came to you. You made smart decisions today, but can you think of one moment where you were like, ‘man, that was dumb?’. Were there any mistakes that you made by yourself or did you force the issue any?

Actually, no I’m happy with how with the start. Obviously, I would have bettered my start, you know, prepped the gate a little differently, but that’s about the only thing I would change, really, because, I mean, both motos I was doing my best of my ability, not leaving anything out there. I’m happy, I’m healthy, fit, love the bike and ready for Hangtown next weekend.

The two-lap card comes out, you are behind your buddy [Jo Shimoda]. Where did the heart rate go right there?

I had been trying, geez it felt like 20 minutes, then I saw the two-lap card and I was like ‘dammit Jo’. I had to find something, the second-last lap I didn’t quite get any windows open and the last lap I just went for it and kind of sent it a little down the hill and pulled it off.