Direct updates from round four of the championship in South Australia.

Follow the 2022 Penrite ProMX Championship with direct MX1 and MX2 updates from round four of the season at Gillman through Racefeed. 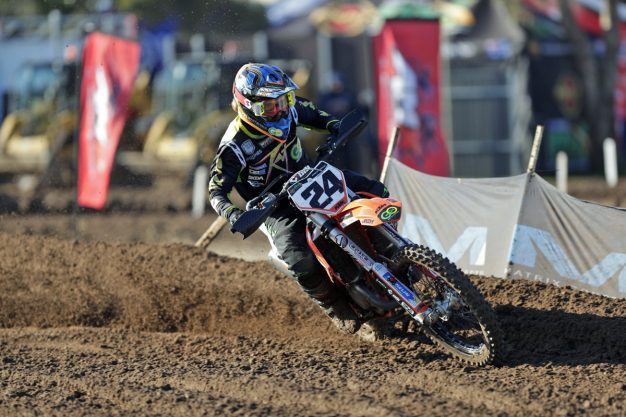 MX1 Top 10 Shootout:
Aaron Tanti was in a league of his own in the Top 10 Shootout with a 2m01.606 lap-time that was almost a second faster than his nearest rival, Brett Metcalfe, who logged a 2m02.453s laptime. Kirk Gibbs had a good showing with third-fastest, ahead of current points’ leader Todd Waters, who crashed midway through the session while on a fast lap. Dean Ferris finished the session in fifth place. Hayden Mellross, and Jayden Rykers finished sixth and seventh, ahead of Joel Evans, Levi McManus and Mitchell Norris.

MX2 moto one:
Empire Kawasaki’s Japanese racer, Haruki Yokoyama jumped to the front of the first Pirelli MX2 race, but it was short-lived as Todd surged around the outside of the second corner and into the lead. The championship leader was never challenged from that point on as he quickly built, then managed, a double-digit second lead. South Australian local, Alex Larwood (WBR Yamaha), pushed his way from fifth into second in the opening laps, but despite his best efforts, had to settle for the runner-up spot, ahead of Yamalube Yamaha Racing’s Rhys Budd. Yokoyama would finish a distant fourth, while Honda rider Liam Andrews held off a late charge from Ryder Kingsford (WBR Yamaha) to finish an impressive fifth. Husqvarna Racing Team’s Dylan Wills crossed the line in seventh, with Noah Ferguson (GasGas) eighth. GasGas Racing Team’s Blake Fox finished P9 and Jesse Dobson (Serco Yamaha) recovered from a horrible start to finish 10th. Fellow Serco Yamaha rider and Round 3 winner, Bailey Malkiewicz, crashed hard early in the race and DNFed.

MX2 moto two:
Yokoyama again grabbed the holeshot of the second MX2 moto, leading Budd and Kingsford through the opening turns. Todd got pinched off the start and rounded the first turn outside the top 10, but hacked his way through the pack into the top three before four laps were in the books. Up front, Noah Ferguson found his way past Yokoyama and Budd into the lead early on, but it was only a matter of laps before Todd would muscle his way to the front of the field. From that point on, Todd continued to click off ruthlessly consistent laps to finish more than 20 seconds ahead of Budd, who eventually got the upper hand of Ferguson late in the race. Kingsford crossed the line in fourth, ahead of Dobson, who recovered from an average start. P6 through 10 were filled by Yokoyama, Andrews, Fox, Dylan Wills (Husqvarna Racing Team) and Jayce Cosford (Yamaha). It was a disappointing race for Alex Larwood: the Yamalube Yamaha rider fought his way through the field after a poor start up to second place behind Todd, but suffered a snapped chain with five minutes left, forcing a DNF.

MX1 moto two:
Aaron Tanti jumped to the front of the pack and scored the holeshot of the second MX1 moto, but again it was Ferris who surged into the lead two turns later. Tanti was having none of it and struck back quickly to retake the lead on the opening lap, with Metcalfe closely behind in third. Throughout the opening half of the race the margins concertinaed between the top five riders as Tanti, Ferris, Metcalfe, Gibbs and Waters negotiated the increasingly rough track. As the laps wore on, Metcalfe capitalised on a Ferris mistake to take over second place and put on a hard charge towards Tanti, while Gibbs muscled his way past Ferris for third. The top three racers tightened up the gaps in the final two laps, but ultimately Tanti claimed a hard-fought victory – and round win – over Metcalfe and Gibbs. Ferris finished a distant fourth, with Waters a further six seconds back in fifth. Mellross finished a quiet race in sixth, ahead of Rykers, and Honda privateers Joel Evans, Joben Baldwin and Zachary Watson.