All 48 motos available live and on-demand on MAVTV Plus. 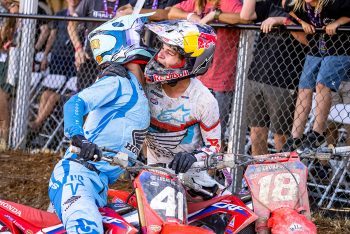 The complete 2022 Lucas Oil Pro Motocross Championship will be broadcast live to Australian viewers through broadcasts on the subscription-based MAVTV Plus streaming platform.

Coverage on MAVTV Plus will feature on-demand access to all 48 250MX and 450MX motos from the 2022 season and will be available in 22 countries via smart TVs, streaming players and any mobile device.

Viewers can subscribe to MAVTV Plus at www.mavtvplus.com, with monthly ($6.99/mo USD) and yearly ($99.99/yr USD) subscription options available.

For a limited time, Pro Motocross fans will also receive an exclusive discount on a new MAVTV Plus subscription, using the codes – PROMX10 for $10 off a yearly subscription and PROMX50 to receive 50 percent off the first month of a monthly subscription. MAVTV Plus is also available to download across various application platforms.

With the 50th anniversary of Pro Motocross commencing on 29 May at Fox Raceway, MX Sports Pro Racing has announced a rotation of American motocross stars to fulfil the broadcast analyst role as part of the extensive broadcast package.

Details surrounding which all-star will serve the analyst role at each respective event will be announced in the days leading up to every national, with McGrath and Johnson confirmed for the opener this weekend alongside host Jason Weigandt.