Western Australian reveals racing return on the cards for 2022. 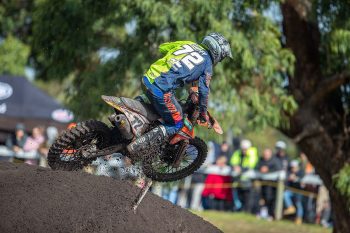 Recovering Regan Duffy has suffered a setback as he rebuilds from life-threatening injuries sustained at Bunbury in October last year, the Western Australian revealing he broke his scaphoid while preparing for a shock ProMX return in the second half of the 2022 season.

Duffy has overcome a cardiac arrest and stroke following the incident at a WAMX state round, which resulted in immense internal complications that included tearing the branch of his brachiocephalic artery off.

While it was expected Duffy would be hospitalised for as long as six months, he made it home in four weeks and shared vision of him riding a mini-bike in February this year. It was confirmed that he completed laps on a full-sized KTM motocross bike later in the month.

In what has been an inspirational rebuilding process, the question on many minds was if or when the number 72 would make a return to competition, with Duffy now revealing that he intended to race the final rounds of ProMX before this latest injury occurred.

“I’ve been keeping to myself lately, training hard and trying my best to not cut any corners, but unfortunately shit happens,” Duffy explained. “I was planning to wait and let everyone know that I was going to do the last three-four rounds of the ProMX Championship.

“I had been getting stronger and stronger and the speed was nearly back – a mistake cost me and I’ve broken the scaphoid in my wrist. I got surgery last week from my surgeon Greg Hoys, everything went well and I’ve gotten two pins put in to help.”

Duffy emerged on the domestic MX1 scene as a force to be reckoned with, winning on debut at Wonthaggi’s opener last year with the KTM Racing Team, ultimately finishing second in the covid-condensed season. Plans to travel to Europe this year were put on hold following his injuries late last year.