Justin Brayton’s 20-year tenure as a full-time professional motorcycle racer was brought to a close at the SLC 2022 Monster Energy Supercross finals. Retiring on his own terms, Brayton experienced success in his career in America, ranking still as the oldest 450SX winner, and Australia as a four-time SX1 champion. He features in this latest Conversation. 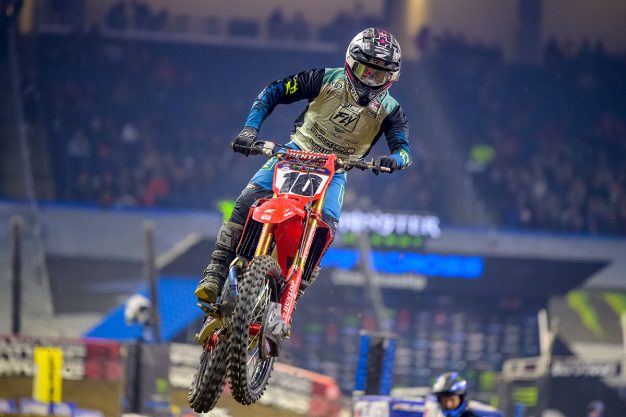 I know you’ve been asked this question a lot, but I’ll ask it one more time. Just the emotions now that it’s all sinking in? I know you have got the family here, a lot of people that are excited to celebrate with you. What are the emotions now this chapter is closed?

The main word is just thankful for all the years and moments, and the struggles, and the successes. Yeah, just thankful for it all, honestly. A little bit relieved too, to call it on my own terms. That’s hard to come by sometimes so I’m just thankful for so many things. And main thing, the people. So many great people and lifelong friends that I’ll cherish for the rest of my life.

I’m more relieved because when you go into the year, it’s hard to say before you race 17 races at the highest level that you’re going to retire and be done. So that’s been the thing that I’ve been struggling with all year is trying to push and get good results but then also enjoy it. It’s hard to do both, it really is. I noticed that this year with, ‘man I’m just going to enjoy it and soak it in’, and I wasn’t doing that well on the track or wasn’t maximising my potential on the track. Then I went back to work and started to get some better results which, that’s fun right? At this level, it’s really fun to do well. So that’s the main thing, just thankful, a little bit relieved that we got through all 17 and on to the next chapter.

I just want to know, the last gate drop, the last lap, how did that feel? Was it different than normal with those special moments?

No, not really because you’re so locked in. You have to be so focused to race at this level. The whoops were challenging tonight, the track definitely kept us on our toes. There was never a moment where I was like, ‘oh man, this is so fun,’ you know what I mean? It’s hard to do that. I was trying to do the best that I could. Seventh was kind of my place. I couldn’t match the top six guys, so I thought if I could maximize where I should be, I was going to be happy, and that’s what we did. The lead group of guys, it’s just unbelievable just the talent and how fast they’re going. It’s crazy. I’ve been around a long time obviously, and how Jason’s [Anderson] riding, kudos to him, is just crazy. Chase [Sexton], the level is just so high and that’s part of the reason. I’ve raced at the front for a long time, and I really no longer can do it, to be honest. Last year getting a podium was awesome at age 37 and this year just a tick off of that front group. Whether it was offseason prep or whatever it was, I had to live with it. So to maximise where I should have finished tonight was good.

When you think about putting results aside, maybe how you carried yourself through your career or the hard work you put in to get where you are, what would you say you are most proud of from your career?

I think just the way I did it, you know. With going all the way through high school playing stick and ball sports while I was growing up, wanting to be a bull rider at one point. There were so many times in my life where I was like, ‘I want to do this, or I want to do that.’ Once I figured out that I was somewhat decent at motorcycles is when I tried to focus on that and really put in the time. So, I think that’s the biggest thing is, how we did it and I’ve stayed really true to my roots. I’ve got a lot of friends and family here today and it’s all friends that I grew up with in Iowa, you know small-town Iowa with a 20,000-population town. So yeah, many moments that I’ll cherish but I’d say that’s probably what I’m most proud of. 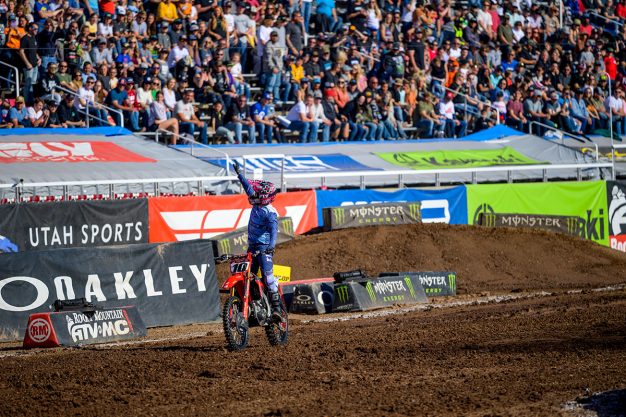 What do you think the emotions will be like as you go into the coming weeks, to realise that the career is done?

It will be interesting for sure. As I sit here today, I’m thankful and relieved and all that, but as we’re transitioning and moving back to my hometown in Iowa with three young kinds, I mean, I’ll be a tee-ball coach here in about a month. Go from racing supercross to being a tee-ball coach. So yeah, stuff like that I’m just going to enjoy. I’ll still ride a little bit here and there this summer. I love motorcycles as much as anyone here and I will for a long-long time. I’m just excited about it and we’ll see. You know, it’s not like it was sprung on me this year that, like ‘alright, you’re done!’ It’s been a long time coming. So, my wife and I and my family, we’ve been ready for it.

The earlier part of your career who you started out racing against all retired fairly younger. We see the transitioning kind of now happening to a little bit of an older age with the average winner age being higher than ever this year. Do you feel like you had a positive effect on maybe some riders, how they perceive how long their career can really be and how long they can be competitive, enjoy it, and really make an impact?

Yeah, for sure, The only thing I’m really bummed about is I feel like my Daytona record might be broken here in a couple more years. I was like a week away from being 34 so I feel that’s in jeopardy, but I love it. I think there’s so much parity in the sport right now if you look at Jason, and like you said I think the average age is like 30. And then you’ve got guys like Chase coming in, what is he 21 or 22? So, I love it. Now being a fan of the sport, it’s going to be so fun to watch because everyone is at such a high level. The equipment is better than ever. The training programs are better than ever. I can’t wait to sit back and watch, it’s going to be awesome.

There were guys that were older when you came in and were watching you on track, and probably thought, ‘that guy is pretty fast.’ When you see cats like Anderson, or Sexton, or [Eli] Tomac, are you watching these younger guys and going, ‘that guy’s got chops? That guy is fast. That’s going to help carry supercross into another generation.’ Something that you were part of 15-20 years ago.

Yeah, I mean, I’ve had the privilege to ride with Chase Sexton at the Honda track, and that’s about all I have to say. The kid has got so much talent and so much speed, it’s just incredible. I’ve obviously grown really close to Kenny [Roczen] and got to ride with him so many days and that level is just something I’ve never been able to achieve, right? To see those guys and see how they ride motorcycles, and the cool thing is that even at 38 this year, I’m still learning. I’m still out there doing motos with Chase and like, ‘man, how did he get through that turn a bike-length better than me?’ And it’s just a simple little turn, we’re taking the same rut. How is it that much more difficult for me, than him? It’s fun to learn. The level has grown and Jason with the level he got to this year, arguably higher than ever, kudos to him. And with Eli switching, there’s so many storylines and it’s a great time to be a fan of the sport.

You’ve mentioned your humble roots in the sport and then you mentioned working with Chase Sexton or Ken Roczen or any rider at a very, very high level. What is it like for you to have that kind of respect from the superstars of the sport for someone who didn’t come from that type of background? What’s it like for them to look at you as one of their equals?

Yeah, that’s something that I cherish, maybe even at the highest level now over the past couple of years. It’s something that I enjoy, over maybe the past five or six years, I really enjoy helping more than I do my results. I love seeing my competitors do well, especially the ones that I have a lot of respect for and the ones that will reach out and ask questions or seek some advice. Anything I can help with, I don’t care if it’s a competitor or not, I love doing that because people did it to me. I had a lot of mentors and I think it is really important as a young athlete or even just a young human being, to have mentors or guys you can look up to whether it’s on the track or off the track, I love that role. Moving forward, if I could slot in and make a difference in somebody’s life and maybe a little bit on the track, I would absolutely love that. So that’s been a really cool thing over the past several years for sure.