Seventeen-year-old Ryder Kingsford has taken the express lane to the senior ranks over the past couple of years, but after an impressive podium performance at the third round of the Penrite ProMX Championship at Wodonga three weeks ago, he’s proved he’s certainly not out of his depth.

Growing up in Goulburn, Ryder and his little brother Kayd (who’s also part of the Yamaha GYTR Junior Racing programme) lived and breathed bikes from a young age.

“We grew up on a farm after we left Sydney when I was five years old and the only thing on the land was dirt bike tracks, mountain-bike jumps and pit-bike tracks,” Ryder says. “If we weren’t riding bikes we were building jumps.”

Ryder’s rise through the ranks is a familiar one. He first took part in club days as a youngster, then graduated to NSW state titles before jumping up to the Australian Junior Nationals in 2013 on a 65cc.

After several years of trying, Ryder won the Mini Lites BW 12-U14 Years title at Gillman in 2019, and as things would turn out, it was the last junior race he’d enter. “The way it worked with Covid in 2020 and 2021, the Junior Titles were cancelled, so it was good to end my junior career with a win, even though I hadn’t expected to finish juniors so early,” he explains.

Kingsford entered the 2021 ProMX MX3 class with the intention of gaining some solid experience racing national tracks, while still being able to jump down to the juniors for the Nationals. At the same time, he moved to Victoria to join Ross Beaton’s Pro Formula motocross coaching, and entered the Wonthaggi opener with plenty of laps around the Victorian circuit under his belt.

Still, he was surprised to take the MX3 overall there: “I had no expectations for that opening round, but I qualified first and went 2-1 in the motos for the overall. It was an awesome start to the year and gave me lots of confidence.”

Kingsford finished second in the shortened MX3 championship, and even though he’d initially planned to spend another year in the class this year, an opportunity cropped up to join WBR Yamaha.

“It was a bit sooner than I’d expected to jump up to the senior class, but I have a goal to race overseas in the future, and thought it was better to take the opportunity and get that experience earlier while I’m still young,” he explains.

“The biggest difference compared to MX3 is the intensity in the opening 10 minutes of a race is really high – you just have to hang onto it – and the extra five minutes and a lap makes the race feel a lot longer. Fitness comes into it, and I need to get better at starting strong and hanging with the boys up front, but I feel like I’m starting to adapt to it now.” 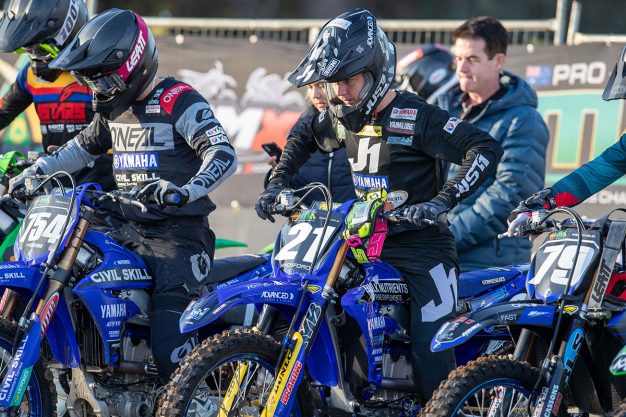 Ryder’s standout ride so far this year was certainly at Wodonga, where he finished second to Bailey Malkiewicz in the opening race and featured on the podium at the end of the day, behind Malkiewicz and MX2 series leader Wilson Todd.

“I was chuffed with that, and it’s the highlight of my year so far, for sure,” he says. “The aim now is to consistently place in the top five and get some more podiums during the rest of the series. I know that it’s possible now and it’s definitely made me hungrier for more.”

“When I compare myself to, say, this time last year, I feel like I’ve made a lot of progress. But there’s more to be made so that I can consistently be in the top five.”

As for the future, he’s got goals to tick off an Australian title then look to head overseas to either Europe or the States.

“I like racing both motocross and supercross and the end goal is to get overseas, but I’m not sure where I’ll end up yet. Either way, I want to race against the best in the world.”