ShopYamaha rider Kyron Bacon’s form and pace has hit another level this year, and no more so than at the Australian Four-Day Enduro (A4DE) where the 20-year-old stormed to an outright victory, beating the bigger capacity machines on a 250 four-stroke. MotoOnline caught up with the Tasmanian pocket-rocket to get his Fast Thoughts on all things off-road related. 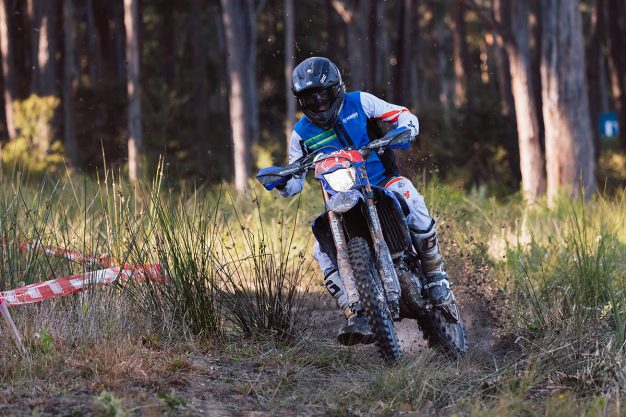 Competing in your first-ever A4DE…

I’d been planning to race the four-day for the past few years, but they were cancelled because of the Covid pandemic, so it was good to finally be able to line up for one. I wanted to treat it as a learning year, but to come away with the win, I was absolutely stoked. The Australian Off-Road Championship (AORC) does a two-day format that Juniors can take part in, but they’re a lot easier on you and parents are allowed to touch the bike. The four-day was completely different in that respect, having to do all the maintenance and tyre changes myself. I did a bit of tyre-changing practice. I’d knock off from work at 4pm and go for a ride, then Dad would be in the shed with a tyre and say ‘change this quickly’. I think it took about six minutes to change my first rear tyre, but at the A4DE I was changing both front and rear in nine minutes. That training was a big help leading into the event.

Winning the outright on a WR250F…

It’s pretty unreal really and I wasn’t expecting it at all. There’s a lot of stiff competition and a lot of bigger-capacity bikes, so I coming into the event, I had no real idea of where I’d end up. I thought I’d lose some time on the faster tracks, but the 250 was loving it. It rained most days and that slowed the racing down. Coming from Tassie where there’s often a bit of moisture, that suited my riding style perfectly. The Yamaha is one of the most aggressive 250s out and I was blown away with how it handled all the conditions. I don’t weigh a lot either, so that could’ve been an advantage, as I didn’t have the extra weight to push me around on the slippery trails. There were lots of different types of tests, from a tight, rocky quarry that was all off-camber, to a few old fire-break tests, as well as the hard-pack, slippery stuff near the pit area. It was an awesome experience, but you had to be on you’re A-game as they tried to penalise you everywhere, like they would at the International Six-Days Enduro. You really had to be the ball, which was cool. 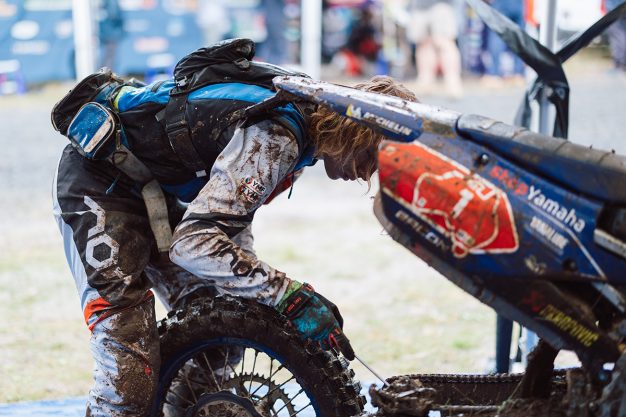 Even though we haven’t done a lot of racing the past two years, we’ve done a lot of testing in that time. When I first signed with Yamaha the bike wasn’t set up right for the first rounds and the results weren’t where I wanted to be either, in the top 20 or so outright. After a lot of testing we came back for the two rounds at Golden Beach last year and placed sixth outright, so we were heading in the right direction. We then worked with Dave from Suspension Matters here in Tassie, and stiffened up the spring rates, and that helped a lot. At the same time I’ve been working on a nutrition and hydration programme set up by my mates at Koda Nutrition, and that’s been a massive help off the bike; in the past that area was a big weakness of mine. I’ve got a personal trainer on the Gold Coast who’s set my programme every week and that’s also helped me a lot this year.

Being part of the ShopYamaha team…

I love being part of this team. Josh Green is the main man in the E2 class and we look up to him and want to try and be there with his pace. We call him ‘Dad’ and he’s always helping us, providing advice about line choice on the test walks, and being super-supportive of Blake and I. Blake Hollis is also in the E1 class, riding against me, and it’s been real good to push each other along. My dad is my mechanic and we have a great relationship. We don’t argue much and he’s always there in my corner if I need anything.

Living and riding in Tasmania…

I like living here; the trails are often wet, which is good for training. Most of the time we get on the boat to travel to the AORC rounds, but with the first rounds of the 2022 championship being located in Queensland we were able to fly up, which saved a long drive! Jonte Reynders also lives in Tassie, so we push each other and ride together a bit. Growing up, Matt Phillips (2016 EnduroGP Champion) was an idol to me and he’s the guy who motivated me to get out there and see if I can give racing a crack. We still ride with him occasionally and he’s always good to get some tips from. Hopefully one day I can replicate his success in Europe.