With three rounds of the 2022 Penrite ProMX Championship complete, MotoOnline takes a look at the form so far of the emerging title contenders in this Rated feature. Rider: Todd Waters
Rating: A-
Rundown: 2019 champion Todd Waters has been a model of consistency so far in 2022, and his strategy of being on the podium at every round is already starting to pay off. Despite having yet to win a moto in the series, the Husqvarna Racing Team rider will enter the fourth round at Gillman at the end of the month with the red plate attached to the front of his bike. He might only have a scant one-point lead, but he’s the only rider to feature in the top three at each of the three rounds so far, and that includes having to juggle commitments racing both ProMX and the Australian Off-Road Championship (AORC). A stand-out third-place performance at Mackay – immediately after finishing on the podium at the two AORC rounds the same weekend – proved that Waters is arguably in the best form of his career.

Rider: Dean Ferris
Rating: A-
Rundown: The vast majority of the time, when a rider returns to the circuit after officially retiring, their form isn’t at quite the same level as it was previously. Honda Racing Team’s Dean Ferris has bucked that trend in convincing fashion. After a slow start to the series with a 13th at Wonthaggi, Ferris has transformed himself into a genuine title threat in record time. A break-through second-moto win at Mackay proved to be a real turning point, as he went on to dominate each of the three races at Wodonga on Sunday. Suddenly, the three-time champion has leapt to third in the points chase, just 11 points off the lead, and has chalked up the most race wins of the series to date. Ferris is experiencing a surge of confidence and momentum, and now that he’s again experienced the winner’s champagne, he’ll be difficult to stop.

Rider: Aaron Tanti
Rating: B+
Rundown: Few would disagree that CDR Yamaha Monster Energy Racing’s Aaron Tanti has lived up to the expectations placed on his shoulders this year. After enjoying a near-faultless pre-season, Tanti helped his team to a dream 1-2 result at the opening round at Wonthaggi, before scoring another podium in the first moto at Mackay. When his series-leading team-mate, Luke Clout, and rookie, Kyle Webster, both crashed out of contention within days, Tanti inherited the championship lead heading into Wodonga. He kept level-headed throughout the day there, despite going down on the opening lap of the first race and having to scramble his way back through the pack to fifth. Two second-place finishes in the back-to-back sprint races proved he’s got what it takes to scrap for the MX1 title, regardless of the formats, and if he hadn’t had that mishap in the opening moto, he’d still be leading this championship as we head to the mid-way mark. 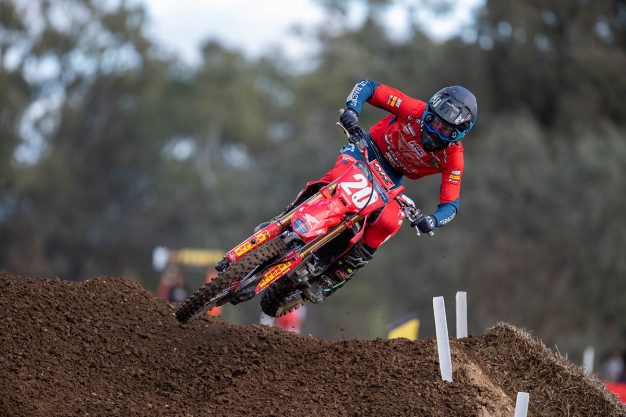 Rider: Wilson Todd
Rating: A
Rundown: Wilson Todd has lived up to the hype this year. Having returned from a full season racing the MX2 championship in the MXGP, the Cairns-based Honda Racing Team rider was widely tipped to be the man to beat in 2022, and so far he’s proven why. Todd’s ability to jump quickly to the front of the pack, dispatch of any challengers, then put daylight between himself and the rest of the field has been a real feature this year, and he’s won five of the six motos so far. The only blight on a near-perfect record came in the opening race at Wodonga, when he crashed early on and had to fight his way through the pack to P4. Todd’s already stretched out a 25-point lead after three rounds, and it’s going to take something special for anyone in the class to reel him in and beat him for outright pace.

Rider: Bailey Malkiewicz
Rating: B+
Rundown: Serco Yamaha’s new signing, Bailey Malkiewicz, entered the 2022 MX2 championship as a bit of an unknown entity, seeing as he’d spent the past couple of years trying to kickstart a career in Europe. He’s quickly transformed from a dark horse to a championship contender, after strong podium performances at every round so far, and capitalising on Wilson Todd’s misfortunes at Wodonga to claim his first MX2 race win. He’s a full moto’s worth of points behind Todd in the title hunt, but Malkiewicz is quickly finding his feet in the class and is expected to only get stronger as the series progresses. The number 11 has certainly experienced a positive start to 2022 and will be brimming with confidence as we head to Gillman on May 29.

Rider: Alex Larwood
Rating: B+
Rundown: Starting the 2022 season in fine form, Yamalube Yamaha Racing’s Alex Larwood kept the pressure on Wilson Todd throughout Wonthaggi’s opener to bank a solid 2-2 scorecard to commence the year’s account. After breaking his collarbone just days before round two at Gum Valley, Larwood delivered another impressive second overall at Mackay to reaffirm his potential. An opening lap crash at Wodonga proved costly for the number five, left to recover from a distant dead last to 17th, before again landing second in the final moto. Larwood has shown some electrifying pace throughout the opening rounds thus far, and if he can manage better starts in the upcoming races, then he could very well be on for a maiden MX2 victory.