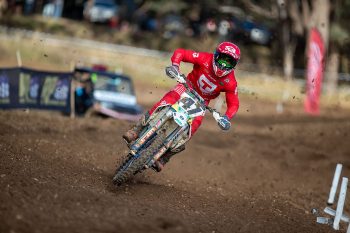 A third consecutive 2022 Penrite ProMX overall podium saw Todd Waters seize control of the red plate at Wodonga, despite leading in the early stages of the championship not being the focus of the Husqvarna Racing Team rider.

Waters has been a model of consistency this season, himself the only rider to land a top-three round finish in MX1 at each of the first three stops this year.

Despite challenging for victory in the opening bout at Wodonga, Waters is yet to win a moto this season, hungry to do so and hold the red plate when it matters most come season end.

“It’s always nice to have the red plate, but honestly, that’s not my focus this early in the championship,” Waters explained. “I just want to get the best results I can every weekend, with the aim of holding the red plate after Coolum!

“My bike was great this weekend, but I made it hard for myself with some average starts. Going down in the first turn of the second moto wasn’t ideal, but being able to salvage fifth was encouraging.

“I was stoked to get P2 for the round, but I was pretty hungry for a win – I know it’s achievable, but I wasn’t in the right position to make it happen today. I’m going to work on my sprint speed for the next back-to-back round, although for now my focus is on the Australian Four-Day Enduro (A4DE) this week.”

Waters ultimately notched a 2-3 scorecard at Wodonga to finish second overall, and leads the championship by a single point over Aaron Tanti. He will compete in the AD4E this week at Erica, Victoria, before 2022 ProMX continues at Gillman, SA on 29 May.