Overall winners Ferris and Malkiewicz recall third round in Victoria.

Dean Ferris continued to make ground at the third round of the 2022 Penrite ProMX Championship at Wodonga, clean sweeping the MX1 motos for Honda Racing, as Serco Yamaha’s Bailey Malkiewicz stood on top of the MX2 overall. MotoOnline caught up with both riders after the races for this Debrief interview. 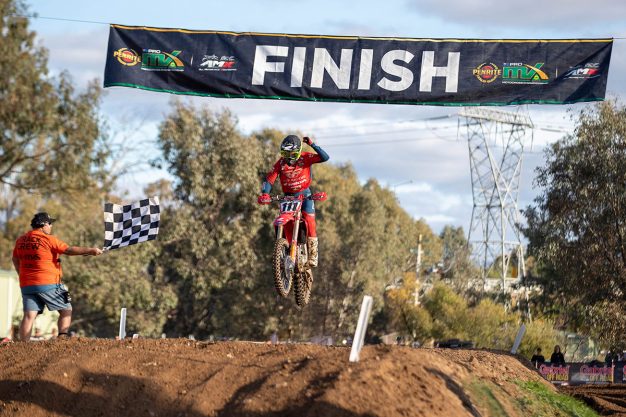 Congratulations on getting the round win at Wodonga. How important was it for you to back up the moto two victory in Mackay and clean sweep the day, both mentally and for the championship?

Mackay was awesome, but I was still a lot of points in the hole. To me, it’s all about maximising on the points that I can. Winning at Albury was pretty awesome, and definitely not guaranteed, but I was good enough to get the wins and am very thankful for them.

After qualifying, was it something that you expected to be able to deliver, winning each of the races contested? I remember seeing after qualifying you were P7, but it didn’t seem to phase you judging by your on-track performances in the races. Did the results surprise you after the initial practice and qualifying sessions?

No it didn’t surprise me, it was weird – I actually felt okay in practice, I think it was more my race pace. I did have one good lap going in superpole, but blew it with like three corners to go. I wasn’t worried, I know when gates drop I seem to be ready. But moving forward, I definitely would like to get better at qualifying and it’s important for me to get a good gate pick at some rounds. This one was important, but I was thankful to be able to get two holeshots anyway.

Talk us through your mindset, in that first moto having that battle with Todd Waters, and Brett Metcalfe was in the mix. You didn’t crack really at all under the pressure. Then in the second part of moto two being pressured by Aaron Tanti, can you explain what was going through your mind there?

When I had surrendered the lead, it was a good opportunity to search around, and look for better lines and see what they were doing better. I was able to sort my lines out and my riding, then I was able to come back and attack. Once I got in the lead I was able to do some even better laps than I was doing. That was kind of where my head was at, and it panned out really well on the weekend.

After a challenging opening round at Wonthaggi, you are now 11 points from the red plate. Is it a position you pictured yourself to be after three rounds, within striking distance of that red plate?

After round one, I didn’t really look any further forward than the next day, to be honest, and just all of the things that I needed to work on and we needed to work on as a team. I’ve just been focussing on that and what I can control in every given moment. There are so many good guys, I knew if I could get good results, there are so many good guys that could mix it up which would help me get back up there in the points, and that is kind of how it has worked in the last two rounds. 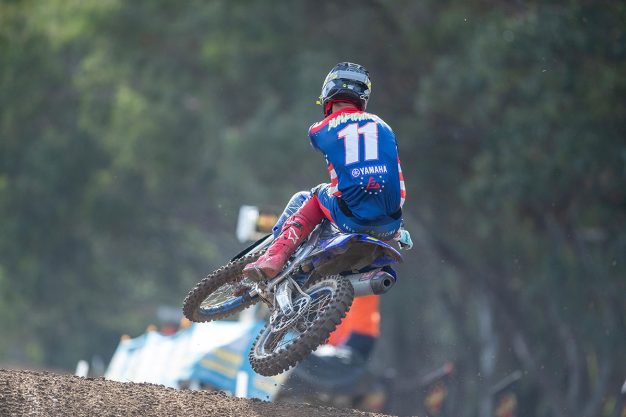 Three rounds into the 2022 ProMX Championship, how important was it to put an end to Wilson Todd’s winning streak in terms of keeping the title fight alive?

It feels good for myself and the team to finally get an overall and get some more good points toward the season. It’s good to be the only one that has put a stop to Wilson, it’s just good to know that the work that we have been putting between round two and three paid off, and just got to keep doing what we are doing and hopefully, we can get some more overalls and close that gap towards the championship.

Talk us through your mindset in moto one, when you saw Todd and Jesse Dobson fall? From the outside looking in, you rode fast and smooth, but was there a shift in your approach after seeing the crashes?

The start of moto one, it took me a couple of laps to get past a few people, but by then like you said Wilson and Dobson fell over. But before that, I knew I had the speed, and my plan was to pass everyone that I could, hopefully, pull away and get a win, but then the falls it made it a bit easier. I had a nice battle with Rhys Budd. It was a good first moto, the plan was go out there and get a decent start, pass whoever I had to then just try and get the win.

With the second moto, was it a matter of damage control to ensure you did get the overall, or was that not really playing on your mind?

In the second moto, the plan was to go out there and try to get another win, we had to pass a few people to get up there. I was closing the gap on Wilson, felt good, felt fast. Just halfway through, fell off a little bit, got a little bit of arm pump. I worked my way through that, then [Alex] Larwood passed me, stayed with him then caught back up to him a little bit. By then I thought, we have got the overall, there is no point pushing too hard and risking the chance of not getting this overall and some more good points. The plan was to go out and try and win both, but settling for a 1-3 and first overall, can’t complain.

Does your preparation change heading into the fourth round, or is it just building on what you have done in the opening rounds and trying to improve on that?

For sure, the plan is to keep on improving. I know I came out and won the first moto by nearly 10 seconds or so after the end of the last lap cruising, but I wasn’t really happy with the way I rode, I felt like I could do a lot better and that’s just what we have got to do. We’re going to go back to training the way we are, keep working hard and improve on what we need to and hopefully come out swinging in round four even better, and I won’t be happy until I can put my full potential out there.