Waters red plate-holder by single point after third round. 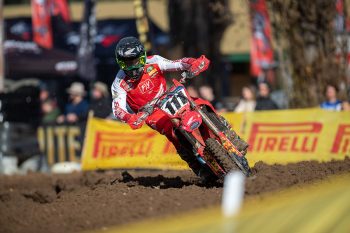 Winning each ProMX Thor MX1 race at Wodonga, Honda Racing’s Dean Ferris dominated the event to claw himself right back into championship contention following the third round in 2022.

Ferris crossed the line to take moto one honours following a closely contested three-rider battle with Todd Waters (Husqvarna Racing Team) and Brett Metcalfe (GO24 KTM). Ferris and Waters traded places throughout the first half of the race as Metcalfe closed in, with Waters ultimately finishing second just ahead of the GO24 rider.

Hayden Mellross scored his best result since joining GasGas Racing Team with P4, as Tanti moved his way back up to fifth following a first-lap collision with Kirk Gibbs – the number 9 unable to avoid the KTM Factory Racing rider as he fell.

Ferris continued his impressive run of form to win the first part of moto two – the second moto being split into two races with Olympic style point-scoring to determine the final result.

Tanti moved his way from fourth to finish second, narrowly avoiding Metcalfe who crashed in the latter stages of the race. Gibbs rebounded from his first moto troubles to finish third, ahead of Metcalfe and Waters.

The final race of the day saw Ferris complete an MX1 clean-sweep, the multiple Australian Motocross champion coming out on top after a battle with Tanti. Tanti ultimately crossed the line in second, 3.8 seconds behind Ferris, as Waters was third.

Metcalfe finished fourth, nursing a damaged radiator from his crash in part one, with Mellross completing the top five in the second part of the moto. When factoring in the Olympic style scoring system, Ferris was victorious in the second moto from Tanti and Waters.

Metcalfe salvaged fourth for the moto, ahead of  Joel Wightman (Yamaha) who notched a breakthrough top-five finish. Sixth was Evans, ahead of West Australian Jayden Rykers (Empire Kawasaki), Wood, and Mellross – who suffered from a lowly 14th in part one of the moto after a fall, as Zachary Watson (Honda) completed the top 10.

Ferris’ perfect scorecard allowed him to claim the round victory and move to just 10 points of the championship lead, with Waters’ second overall for the round enough to see him take control of the red plate by a single point over Tanti, who took the final step on the MX1 overall rostrum at Wodonga. Metcalfe and Mellross rounded out the top five for the round.