Monster Energy Star Yamaha Racing’s Eli Tomac has been crowned the 2022 450SX champion after cruising to fifth at his home round at Empower Field At Mile High in Denver.

Tomac’s main rival, Jason Anderson (Monster Energy Kawasaki) claimed his third round victory in a row, but Tomac’s points’ advantage heading into Denver was comfortable enough that the Yamaha rider only needed to finish 14th or better to clinch the championship.

Team Honda HRC’s top qualifier, Chase Sexton, edged Tomac for the holeshot at the start of the Main event, with Anderson close behind in third.

However, Sexton’s lead was short-lived after he made a big mistake and went into the tuffblocks two laps later, allowing Tomac and Anderson to inherit first and second position respectively.

Anderson put his head down and quickly stretched out a lead as the track continued to dry out in the day-time event, while Tomac went into championship-saving mode. He gave up second to Stewart then relinquished any podium result when Musquin got by.

Sexton, meanwhile, sliced his way back to fifth with five minutes remaining, before finding his way past a cruising Tomac as the laps ran down.

Anderson took the win, from Stewart and Musquin, with Sexton in fourth. Tomac’s fifth-place finish saw him claim the 2022 450SX Championship, to the elation of the packed Denver stadium. 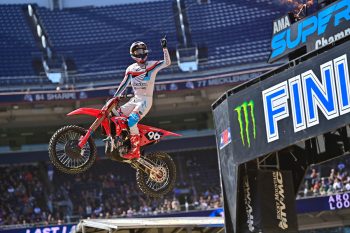 In the 250SX West class, Team Honda HRC’s Hunter Lawrence has ensured the championship title fight goes to the final round at Salt Lake City next weekend, after a composed victory at Denver, CO.

Craig shadowed Hunter and tried several times to make a move on the opening laps, but Hunter remained focused on the job at hand and maintaining throttle control on the hardpack, slippery track.

Just behind them, Mosiman blitzed past Swoll in the whoops for third and tried to close the gap on the top two.

As Craig continued to turn the screws on Lawrence, the Yamaha rider went down entering the sand section and remounted in seventh.

Lawrence suddenly found himself with a five-second lead over Mosiman and Monster Energy Pro Circuit Kawasaki’s Jo Shimoda, and settled into a rhythm to manage the buffer, as Craig desperately tried to claw his way back up the leaderboard.

After some back-and-forth with Shimoda, Craig stormed into a podium position with three laps remaining, but that was as far forward as he was able to go before time ran out.

Lawrence claimed a five-second win to ensure the 250SX West title fight was taken to the final round at Salt Lake City next weekend.

The final round of the 2022 Monster Energy AMA Supercross Championship will be held next weekend at Salt Lake City, UT. 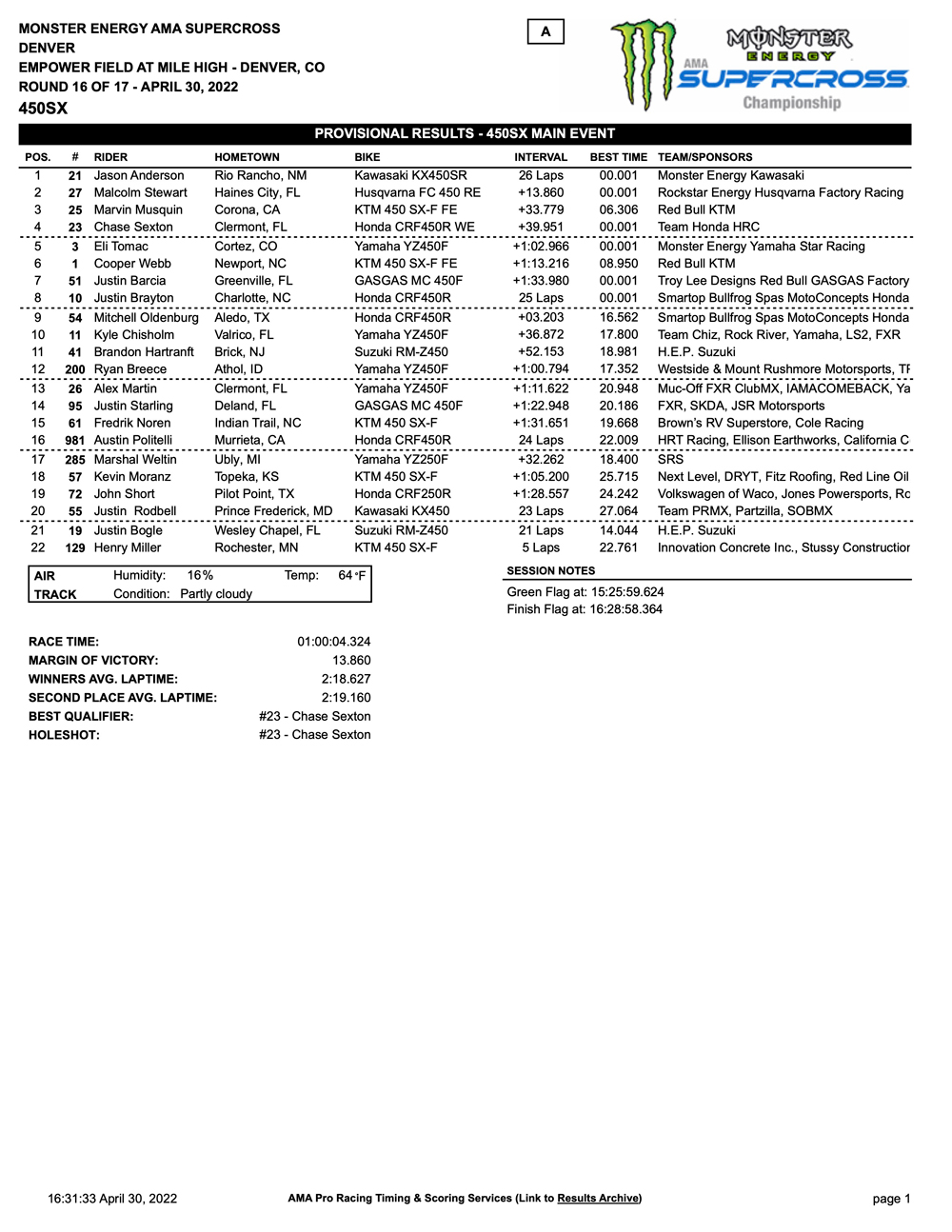