What's emerging in the opening rounds of the 2022 championship.

As we head into the third round of the 2022 Penrite ProMX Championship this weekend in Wodonga, we’re seeing a number of trends beginning to emerge across the main categories. MotoOnline takes a closer look at these in this edition of Countdown. 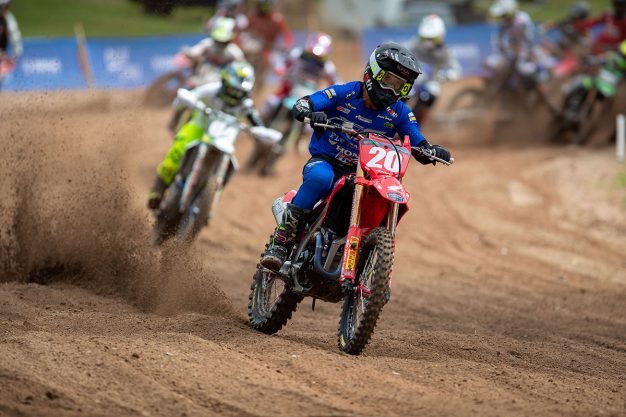 8. Healthy entry numbers:
While all classes of the rejuvenated ProMX championship are enjoying good entries at the opening rounds, the MX3 class in particular has been bursting at the seams. The field of youthful hopefuls has had full gates and has meant we’ve seen motos for the non-qualifiers at both of the opening rounds. The MX2 class has also had full 40-rider grids at both Wonthaggi and Mackay, while numbers for the MX1 field have averaged at 27 riders over the two rounds, which is about the norm for early in the season. Still, the healthy representation of riders across the day is a great sign of the health of the sport and could be a pleasant by-product of having minimal championship gate-drops over the past two years.

7. Factory rider woes:
After just two rounds of the championship we’re seeing something of an unusual trend, with three of the main contenders breaking bones in their legs. Just days before the 2022 series kicked off, KTM Racing Team’s new MX2 signing Nathan Crawford broke his femur in a training crash at Coolum, effectively ending his title hopes before they could even begin to be realised. At the second round in Mackay, then MX1 series leader Luke Clout broke his tibia and fibula in a huge high-side crash while leading the opening moto. After a dominant display in the opening round at Wonthaggi, the CDR Yamaha Monster Energy racer was a heavy favourite to defend his title, but is now focusing on a return for the upcoming Australian Supercross championship. Just days later, Honda Racing’s new MX1 points-leader Kyle Webster crashed while practicing at his home track in Wonthaggi when his bike malfunctioned. The result was a broken left foot – requiring a bone graft – and a broken right ankle. With no return date announced yet, it’s unknown if he’ll return later in the season.

6. Polished TV broadcast:
Last year, series organiser Motorcycling Australia (MA) and the ProMX team introduced a quality livestream and television broadcast that put our sport in front of a whole new audience. For 2022 the package has become even more polished, with the commentary team and filming coverage being streamed into peoples’ homes being of a very high standard. Having a broadcast-quality livestream means fans and the industry can catch the on-track action in real time, even when they can’t necessarily get to the races, and that ultimately leads to a larger following of the sport on a domestic level.

5. Webster impresses early:
Despite being knocked out of contention for this year’s championship, Webster has proven to be one of the most promising young stars we’ve seen come through the ranks in recent years. The MX1 rookie holeshot and led both races at the opening round at Wonthaggi, before squandering his leads with unforced crashes and errors and ultimately missed out on an overall podium on countback to Todd Waters (Husqvarna Racing Team). Webster again came out firing at Mackay to claim his first MX1 round victory with an impressive 1-2 result, capitalising on Clout’s season-ending crash to earn the red plate after two rounds. While he’s out of action for now, he’ll certainly enter the 2023 season as one of the favourites. 4. Manufacturer battle heats up:
So far this year, there have only been two colours that have stood on top of the podiums over eight races – blue and red. Honda has led the charge with Wilson Todd in the MX2 class, but the brand also topped both races in the MX1 class at Mackay, courtesy of Webster and his Honda Racing teammate Dean Ferris, capping off a dream weekend for the Yarrive Konsky-led team. Honda rider Cambell Williams is also leading the MX3 class. As well, CDR Yamaha Monster Energy started its season on a perfect note with a 1-2 result at Wonthaggi and there’s a blue pack building behind Todd in the MX2 class, with Alex Larwood (WBR Yamaha Racing), Rhys Budd (Yamalube Yamaha Racing) and Jesse Dobson (Serco Yamaha) all within the top-five. Six of the top 10 positions in the MX2 class are filled by Yamaha riders.

3. Business as usual for Todd:
There’s only been one name at the top of the MX2 results sheets this year and that’s Terrafirma Honda Racing’s Wilson Todd. The Queenslander has been in scorching form over the opening two rounds, setting the pace to win each of the four motos so far. It’s been a dream start for Todd after returning from a stint racing the MXGP circuit and he’s certainly firmed up his pre-season reputation as being the man to beat in 2022. It’s still far too early to be talking about perfect seasons, but Todd has set the standard for the rest of the field to meet this year.

2. Tanti’s stock on the rise:
With the two MX1 contenders sidelined, CDR Yamaha Monster Energy’s new MX1 rider Aaron Tanti will enter this weekend’s third round at Wodonga as the points-leader elect in the premier class. The New South Welshman has been something of a revelation so far this year, having featured on the podium at three of the four races so far. Even though he’s yet to win a MX1 moto, it only seems like a matter of time after he led a good portion of the opening moto at Mackay, but faded in the second as he battled with an illness. Now that the series is headed into a string of hard-pack circuits, Tanti will be confident in his chances of continuing his run of form and taking the opportunity that he’s been given atop the points.

1. MX1 race wide-open:
With both of the MX1 championship front-runners now sidelined with injury, the title chase in the class is wide-open. While Tanti inherits the series lead for Wodonga, there’s a class packed with talent and experience hot on his heels. The 2019 champion Todd Waters (Husqvarna Racing Team) is just three points adrift of the Yamaha rider, with 2015 champion Kirk Gibbs (KTM Racing Team) a further nine points back. Seasoned veteran Brett Metcalfe (GO24 KTM) is just behind him in fifth, followed by three-time champion Ferris in sixth. There’s everything to play for this weekend and, with Wodonga expected to receive rain every day until Sunday (which is set to be fine at this stage), there are countless scenarios that could play out on race day.