Australian Jett Lawrence has clinched the 2022 Monster Energy Supercross Championship 250SX East title at Foxborough, in the penultimate round of the region won by Austin Forkner, as Jason Anderson made it two-straight wins in 450SX.

Team Honda HRC’s Lawrence was able to work his way through the pack from P8 at the end of lap one, but it was Forkner who crossed the finish first in the end.

Lap one was led by Cullin Park (Phoenix Racing Honda) before Pierce Brown (TLD Red Bull GasGas) took his turn at the front, leading until the final minutes when Forkner made his move with three to go, followed by Lawrence a lap later. Brown would hold onto third.

Lawrence now has a 53-point advantage in the standings with only the 250SX East/West Showdown remaining in Salt Lake City for the eastern region, however, before then, 250SX West resumes in Denver next Saturday night. Anderson was in strong form all day and carried that momentum into the Main event, with a three-second win over Honda HRC’s Chase Sexton and Red Bull KTM’s Marvin Musquin.

Cooper Webb (Red Bull KTM) took the holeshot of the 420SX Main Event, with all of the main players, Tomac (Monster Energy Star Yamaha Racing), Anderson and Sexton hot on his tail.

As Tomac focused on making a pass on Webb in the opening laps, Anderson threw it up the inside of Yamaha rider in a turn, causing Tomac to stall his machine.

The contact dropped Tomac to sixth, and from that point he settled into a safe rhythm, content to clinch the 450SX into his home town of Denver, CO next weekend.

Up front, Anderson dispatched of Webb for the lead, with the KTM rider then steadily dropping positions through the pack to eventually finish sixth.

Sexton kept Anderson in sight for half the race, before settling for second place, ahead of Musquin.

Earlier in the day, Musquin and Sexton had captured the heat race wins during the second of three consecutive day-race events on the schedule.

The 16th and penultimate round of the Monster Energy Supercross Championship will be held in Denver, CO next week. 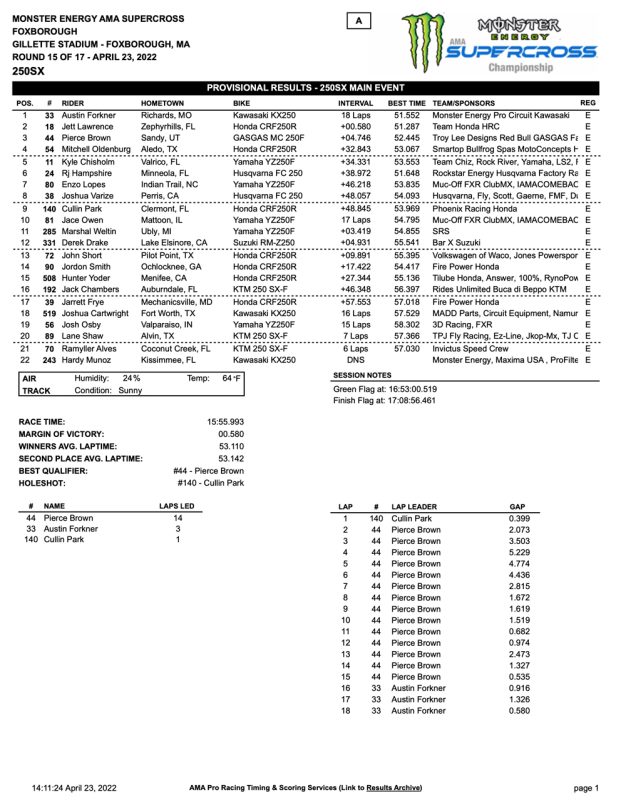