Immediate Clout replacement not a priority for CDR team

Fill-in may be considered later on in the ProMX season. 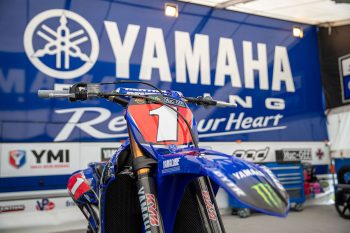 Wonthaggi winner Clout devastatingly crashed out of the lead in the opening moto at Mackay, which resulted in a broken tibia and fibula that brought a premature end to his championship defence.

Meanwhile, Tanti currently sits second in the ProMX standings, having finished on the podium in three out of the four motos this year. With current red plate-holder Kyle Webster (Honda Racing) suffering a broken ankle and foot while training post-Mackay, it further strengthens Tanti’s 2022 prospects aboard the YZ450F.

Speculation has been mounting in regards to any potential fill-in opportunities for the injured Clout’s position, but Dack told MotoOnline that there isn’t any plan to draft somebody in for Wodonga’s third round of ProMX next weekend and it’s unlikely will we will see a second CDR entry in Gillman either.

“At the moment, we’ve got two races within the next 6-8 weeks, so at this stage we just want to keep everything calm and not upset the applecart, because we are still in the very early stages of this championship,” Dack explained.

“Aaron has been battling up front so far in this championship, it’s only round two, but he has been in the hunt the whole time, so instead of bringing someone in so quickly to replace Luke, we are trying to run with Aaron for the next couple of rounds to settle things down and get him settled into this championship, as it is still pretty early.

“Then we will probably look at doing something if the right person is around after that. We are not jumping through hoops to go and find someone, it has to be the right opportunity for us and the replacement rider.”

Clout isn’t anticipated to be returning prior to the end of the outdoor season that’s scheduled to conclude at Coolum between 20-21 August, instead turning his attention to the Australian Supercross Championship due to begin around November – the opening round date still to be confirmed.