Three Things: Next in line

A closer look at who can step up in MX1 following Clout exit.

With defending champion Luke Clout now ruled out of the 2022 Penrite ProMX Championship after crashing out at Mackay, the doors of opportunity have suddenly swung open for a new – or former – champion to claim the MX1 crown. MotoOnline takes a closer look at the title contenders in this Three Things feature. After a successful opening round of the 2022 season at Wonthaggi a little over two weeks ago, CDR Yamaha Monster Energy’s Luke Clout was supremely confident in his chances of being able to defend his MX1 title – and for good reason. A double-moto victory in the dark Victorian loam was a great way to start the season, but it was how he did it that was most impressive. While practically every other racer on the track made mistakes and found the dirt at least once over the course of the day, Clout put on a clinic of smooth, fast, mistake-free riding in both motos and was rewarded with a perfect 50-point scorecard for his efforts. Clout’s confidence coming into Mackay was understandably high and he quickly moved to the front of the pack early in the opening race before disaster struck. On one of the fastest sections of the track, the rear wheel of Clout’s YZ450F suddenly stepped out and propelled him into the face of the following jump. Clout was transported to hospital and announced later that day that he’d broken his tibia and fibula in the crash, immediately ruling him out of the remainder of the outdoors. It’s a bitter blow for the talented Sydney-sider, whose focus will now turn to a successful Australian Supercross campaign at the end of the year.

The saying ‘one’s misfortune is another’s opportunity’ couldn’t ring truer than it does in the race for the 2022 MX1 title. With Clout sidelined, the focus now shifts to those waiting in the wings, to see who will make the most of the defending champion’s unfortunate exit. As it turns out, the two relative newcomers to the premier class, Kyle Webster (Honda Racing) and Clout’s CDR Yamaha Monster Energy team-mate Aaron Tanti, have suddenly found themselves in the box seat with one quarter of the championship now in the books. Having claimed the MX2 title in dominant fashion last year, Webster has inherited the MX1 red plate as we head to Wodonga next month. The class rookie has been in great form so far – he was arguably the fastest guy at Wonthaggi, but was let down by crashes, then claimed his first MX1 moto and round win at Mackay. If he stays healthy and keeps mistakes to a minimum, he’ll be tough to beat. Just six points behind Webster though, Tanti has also shown a remarkable turn of form in 2022. Last year the class rookie sat out the opening round with a broken wrist, but a third-place moto result at the third (and final) round at Maitland signalled his potential. It was enough to catch the eye of Yamaha for its premier class prospects and it’s fair to say that Tanti is repaying their faith in him with blistering form on track. At Wonthaggi, Tanti helped the team to a perfect 1-2 round result and was looking on-point for another strong result at Gum Valley, before the illness he’d been carrying into the weekend, combined with the energy-sapping North Queensland humidity, saw him fade late in the day. A 2-6 scorecard wasn’t terrible considering his condition and he’s still well in contention as the series heads to a string of his more favoured hard-pack rounds. 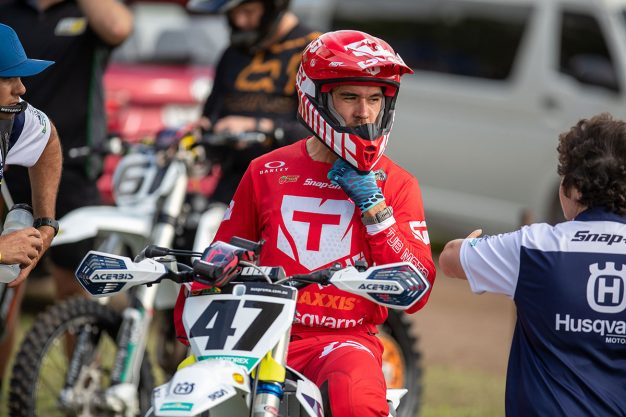 Snapping at the heels of the younger talent is a host of battle-hardened racers who certainly know how to win championships and play the long game. 2019 champion Todd Waters, 2015 title-winner Kirk Gibbs, three-time MX1 champion (2016-2018) Dean Ferris and experienced longtime international Brett Metcalfe are all lined up ready to start applying the pressure as the series works towards its mid-stages. If you include another multiple-time champion in BBR 102 Motorsports’ Matt Moss (currently 14th overall a points-less showing at Mackay), the MX1 field still has no less than seven championships-worth of experience on the outside looking in. Third-placed Waters (Husqvarna Racing Team) certainly knows his way to a title and his current fitness level is on another level. In the two days leading up to Mackay, Waters raced to two podium performances at the Australian Off-Road Championship, then swapped his enduro bike for his motocross bike and again podiumed a day later at Gum Valley. That performance alone should be sending alarm bells through the field, especially as he’s only nine points off the lead. Gibbs (KTM Racing Team) was one of the only riders to straight-up beat Clout last year and, now that he’s back with the team that helped him to his lone title, he’s looking comfortable and fast. A podium result from Mackay’s second moto has given him confidence that he’s on the right track and the ultra-consistent rider will now want to dial up the results. Metcalfe (GO24 Racing) mightn’t have won an Australian MX1 championship, but he’s by far most experienced racer on the grid with over a decade in the US and Canada – remember, he finished runner-up to Ryan Dungey in the 2010 Pro Motocross 450MX Championship! The scary thing is that, despite not getting any younger and enduring a storied career, the South Australian can still win races – Metcalfe claimed the first moto victory at Wonthaggi last year. As for Honda Racing’s Ferris, he’d like nothing more than a fairytale comeback to the sport after he announced his retirement last year as he recovered from a broken back. Despite the injuries, upon coming back in 2022, Ferris looked like he hadn’t missed a beat at Mackay as he surged to a memorable second-moto win, indicating to everyone that despite a disappointing initial return to racing at Wonthaggi, he is still very much a title contender this year.