Overall winners Webster and Todd recall second round in Queensland.

Honda Racing’s Kyle Webster bounced back from a challenging opening round to claim the Penrite ProMX overall victory at Mackay and with that, the red plate, as Terrafirma Honda Racing’s Wilson Todd continued his run of dominance with a perfect scorecard in MX2. MotoOnline caught up with both riders after the races for this Debrief interview. 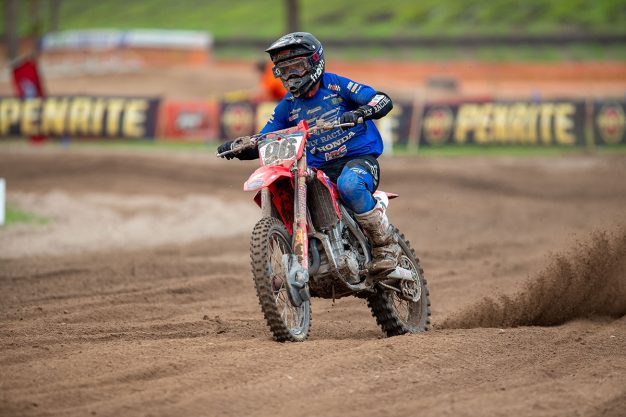 Congratulations on getting the win. Talk us through the feeling of being able to get it done and secure the overall at Mackay.

In both races you seemed to adopt a very methodical approach, working your way forwards as each progressed, particularly in the closing stages. Was that a plan you had made following what had transpired at the opening round or was it just how the races played out?

It was quite hard to pass, like as wide and as fast as the track was, it sort of only had one fast line. Obviously those guys are really, really experienced, and being shuffled back on the first laps, fifth or sixth I think I was, it made it harder to get straight to the front. I figured if I just took my time and really worked out places where I knew I could pass, I’d be able to get it down within the race distance. A few people made some mistakes in front of me which helped a lot, and honestly tried not to rush, I wanted to take my time and keep the gap somewhat close so I could make a charge towards the end. I sort of think that was my strength, the end of the races.

How important was it to get the win at Mackay? You are probably getting tired of hearing it, but with a lot of people labelling you a Wonthaggi specialist, to be able to show you can win another track, was that something that was quite important for you?

Yeah, definitely. I always want to win wherever we go, but I was really happy to do it where no one else has really been that much, I’ve never been there. Sure it was sandy and whatnot, I guess that is one of my strengths, but it was also very, very slippery and quite unpredictable. I am very happy that I managed to get the win there.

Now that you do hold the red plate, is there a change in mindset for you? Or is it still too early in the season still to think about that? I guess you can think of the championship as a long game, but for you is it still trying to win as many races as possible, or two rounds in, with the red plate, is it time you start thinking about the long game and settle for a podium if it comes down to it?

I didn’t really expect to have the red plate after this round, especially after what happened at Wonthaggi and how solid Luke [Clout] has been. With him going out, it made the points a bit closer for everybody, but yeah I don’t think the mindset has really changed at all, it’s still win as many races as possible and be solid. I actually haven’t even looked at the points, I’m not sure how close it is, but I don’t think it changes too much for me to be honest. 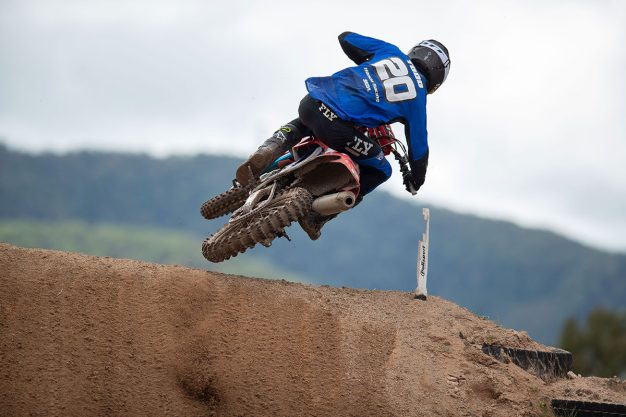 Firstly, congratulations on another good weekend, four from four to start the year. You had mentioned after round one that you made it difficult for yourself in some aspects, did the round win at Mackay come a bit easier?

Physically yeah, it was a little bit easier. I still got quite tight in the first race, which I need to figure out what’s going on. In the second race I was pretty comfortable the whole time, just the pace I was going.

You mentioned being pretty comfortable the whole time. With [Jesse] Dobson getting the holeshot in that second race and opening a little bit of an advantage at the start of the race gap wise, can you talk us through what was going through your mind at that point? Were you confident if he didn’t have that mistake you would have been able to pull him back in to win that race?

I guess there were a couple of things going on, like I wasn’t too worried what Jesse was doing, because I knew he wasn’t really in contention for the overall win. I felt like, if I just start up front and ride around consistent all year, then everyone else has to take the risk to try and get in front and pull away, from a points perspective they have to beat me. I feel like if I get a good start and ride smooth, they have got to take all of the risks, and that is what Jesse did, he took off and took the risks, and he ended up having a bingle. It worked in my favour, but just from my aspect, try and get out front, be smooth and also those first couple of laps if I could find some cheeky lines somewhere to help me at the end of the race, that is what I was doing, having a look around to see if there are any good lines that nobody is really thinking about. I might have been able to pull Jesse back in, but for the most part I wasn’t really too worried, I sort of just let him go.

In that second race, once you got to the lead you seemed to be able to stretch out quite an advantage. When you look at the championship and think the long game, how hard are you having to ride in these races? Is there a point where you are going to put the hammer down and absolutely blitz them or is it more control for you when you get out front? From the outside looking in, it looks like you are doing it almost easy in a sense.

I would like to put the hammer down and ride at the intensity I had last year in Europe, but I just haven’t really been able to do it. I’m little bit behind with my fitness, where it needs to be, and the bike time, I haven’t got as much bike time as I would want, I’ve been tightening up a little bit. I’m just working on getting on top of those things. If I can get on top of that then I think I can comfortably ride a bit better. For the time being, the pace that I have been doing, I feel like that is comfortable and safe for me until I have that edge… I want to get that edge I had last year in Europe.

With the CRF250R being a new platform for this year, was there much you changed on the bike from round one to round two?

Nah, I think it’s the same. I didn’t ride much before round one – I had these niggling kind of injuries. The only thing that really changed between round one and two was I had a couple of days on the bike and then I think we put a different shock in for the weekend, but I didn’t actually try it before the weekend, I just went out in practice and raced with it. It seemed pretty good.