Direct updates from round two of the season in North Queensland.

Follow Racefeed for direct updates of the MX1 and MX2 motos in the second round of the 2022 Penrite ProMX Championship at Mackay. 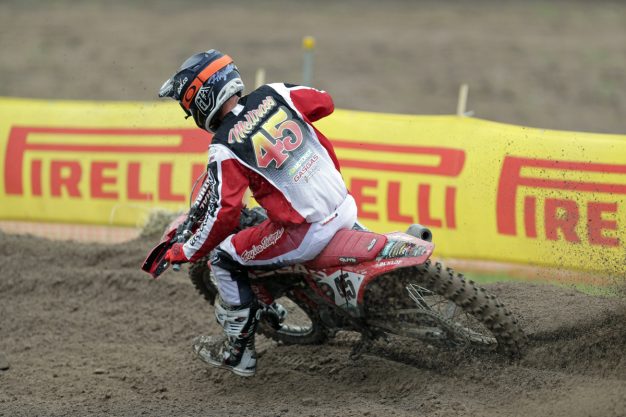 MX2 moto one:
Championship leader Wilson Todd jumped to the front of the first MX2 moto, with ahead of Brodie Connelly (WBR Bulk Nutrients Yamaha) and Rhys Budd (Yamalube Yamaha Racing), but Budd quickly dispatched of Connelly and moved into second, while Dylan Wills (Husqvarna Racing Team) and Noah Ferguson (GasGas) rounded out the top five. Midway through the race, Wills began to find serious pace, slicing past Connelly into third, while Bailey Malkiewicz also began recovering from an early crash and moved into seventh. Alex Larwood (Yamalube Yamaha Racing) also made some big moves as he worked his way from a top 10 start into third past Wills as the clock ran down. Up front, Wilson Todd steadily built a commanding lead, and with five minutes to go, he’d built a six-second buffer over Budd. Budd had concerns behind him though, as Larwood closed the four-second gap between them. Larwood passed his team-mate on the dying stages, but was lucky to not go down when a lapper crashed in front of him. Todd took the checkered flag, ahead of Larwood and Budd, while Wills put a last-gasp pass on Ferguson to take fourth. Malkiewicz finished sixth, ahead of Connelly, Kaleb Barham (Husqvarna), Liam Andrews (Honda) and Haruki Yokoyama (Empire Kawasaki). Pole-setter Dobson recovered from a turn-two crash to finish to 12th.

MX1 moto one:
Kyle Webster earned the first of the MX1 holeshots, but was quickly shuffled back in the opening corners, allowing Dean Ferris and Luke Clout to lead the pack through the first two turns, with Matt Moss in third. Ferris made a mistake on the big hip jump where he drifted wide, allowing Clout to take the lead on the opening lap. One lap later, the Honda Racing rider then slid out in a sweeping left-hander, allowing Tanti by into second. Shortly afterward, Matt Moss crashed out of third and hurt his leg, which promoted Webster into the podium spots, with Waters and Metcalfe rounding out the top five. Early leader Clout’s race came to an early end when crashed hard into the face of the same big jump he passed Ferris on, allowing his team-mate Tanti to take over the lead, with Webster and Waters filling the top three positions. Ferris pushed hard after his early mishap into fourth as the race neared the mid-way mark. With 10 minutes remaining, Webster put on a surge, making a bold pass on Tanti for the lead over a big ski jump, then continued to stretch out a handy lead. As the time wound down, Metcalfe found his way back past Ferris for fourth. Webster controlled the remainder of the race to take the win from Tanti, with Waters third, Metcalfe fourth and Ferris fifth. P6 through 10 were filed by Kirk Gibbs (KTM Racing Team), Jayden Rykers (Empire Kawasaki) Lochie Latimer (KTM), Hayden Mellross (GasGas Racing Team) and Joben Baldwin (Honda).

MX2 moto two:
Dobson launched to the front of the second MX2 moto, ahead of Todd, Malkiewicz and Wills, as rain began to fall at the picturesque Gum Valley circuit. Larwood started in eighth but quickly worked his way into fifth in the opening two laps. An unforced error by Dobson saw him drop to fourth and handed the lead to Todd. Dobson capitalised on a small error from Wills to move back into the top three, with Larwood also finding his way past the Husqvarna rider a handful of corners later. As the laps wound down, Dobson worked hard and closed the gap on his Serco Yamaha team-mate, Malkiewicz, making the pass with two laps remaining. Todd took his fourth consecutive moto win, ahead of Dobson and Malkiewicz, with Larwood and Wills rounding out the top five. P6 went to Ryder Kingsford, ahead of Budd, Connelly, Noah Ferguson and Tye Jones (Husqvarna).

MX1 moto two:
Ferris jumped to the start of the second Thor MX1 race, ahead of Gibbs and Tanti, with Metcalfe and Waters rounding out the top five during the opening laps. Tanti then pressured Gibbs for second, making a great pass on the KTM Racing Team rider, and set off after Ferris. Webster, who had an uncharacteristically bad jump off the gate, worked his way through the pack and passed Waters for fifth before 10 minutes had passed. Tanti slowly began to reel in Ferris as the race developed, while Metcalfe and Webster closed onto the rear wheel of third-placed Gibbs. Webster made the first move, the Western Australian quickly dispatching of Metcalfe, before a Gibbs mistake in a rutted corner gifted him third position. As the moto wore on and the track continued to get chopped up, Ferris continued to stay in control, while Webster gradually pulled himself onto the rear wheel of Tanti, then pulled the trigger when the tiring CDR Yamaha Monster Energy rider bobbled in an off-camber corner. Tanti then gave up valuable positions to Gibbs, Waters, then Metcalfe as he faded on the final laps. Ferris held on for a memorable win, followed by his team-mate Webster, with Gibbs completing the race podium. Waters, Metcalfe, and Tanti rounded out positions fourth to sixth. Rykers, Caleb Ward (Honda), Lochie Latimer (KTM) and Joel Evans (Honda) completed the top 10.