Overall winners Clout and Todd recall first round in Victoria.

CDR Yamaha Monster Energy’s Luke Clout started his Penrite ProMX title defence in the best possible way at Wonthaggi, notching a 1-1 scorecard as Terrafirma Honda Racing’s Wilson Todd stamped his return to domestic competition with a perfect MX2 points-haul. MotoOnline caught up with both riders after the races for this Debrief interview. How does it feel as the reigning champion to walk away from round one still with the red plate, perhaps at a track that you weren’t the favourite?

It feels good. I was really confident with my pre-season that I had going, I was keeping it pretty quiet. I was confident. I put a lot of work in and I think that showed on the weekend. I feel like I always seem to get downplayed when I come to Wonthaggi and the softer surfaces, but I just let the result do the talking.

Rewind 12 months and your fortune was the complete opposite at the 2021 season-opener. This year, now that you are able to walk away from round one with the red plate, it must be a pretty good mindset, confidence-wise, heading into Mackay.

For sure. Anytime you can win some races and some rounds, you build confidence. I came this weekend quietly confident and left with even more confidence, so just going to let that roll-over, have a good couple of weeks and come into Mackay swinging.

In both motos, were you surprised when you saw Kyle [Webster] make those mistakes. What were your thoughts when you saw that? Was it relief, surprise or a case of, ‘game on I can really capitalise on this’?

It wasn’t really relief, it was more just let’s capitalise on his mistakes. We knew Kyle was going to be strong at Wonthaggi, for sure, everyone was tipping him to win and he was the favourite, but you need to finish the races, and he didn’t do that. I captilised on the mistakes – I think I rode the smartest throughout the weekend. The track was tough and it was easy to make mistakes. You need to learn to ride to the conditions and make smart decisions as you go through the day. We did that and we are coming out with the 1-1 result and got solid points.

How would rate your form and fitness entering round one, let’s say compared to where you expected it to be?

I have been working really hard, on and off the bike so my fitness was very good. I knew that was going to be my strong point toward the end of the motos. One of the curveballs was actually the heat, that second moto was pretty hot, so that was probably more so the hardest part. I felt like I was almost overheating a little bit towards the end because I did put a bit of a push on there to come through the pack, overall happy with my fitness, the bike is working good and right now I’m really gelling with the program we have got going. 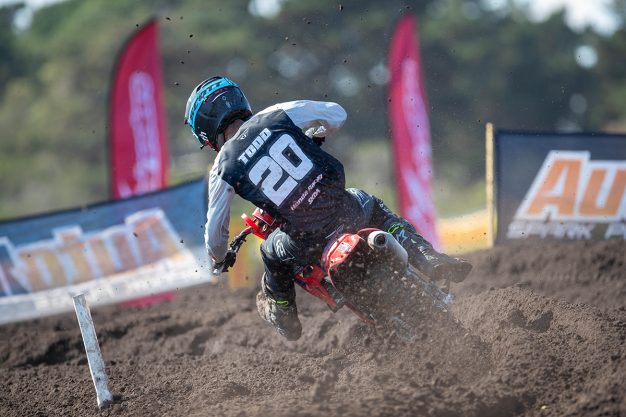 To come back, have a perfect day at Wonthaggi in qualifying fastest with two moto wins, how does that feel after your stint overseas?

It feels alright. There’s a lot of expectation and everything around me, with myself and the team and everyone. Still on top, it feels good to stamp it, I guess, but I definitely made it hard on myself.

When you say you made it hard on yourself, I remember hearing that after the races also, was there anything particular you were referring to? Was it having [Alex] Larwood right there in both motos or were there things in your riding perhaps that you felt you could have done better?

Just some physical things, but nothing major. I got a little bit of arm-pump in the first one, Alex was on me the whole way. I didn’t really feel like I rode the way I wanted to all weekend and in the second one I had another little issue I have to work on. Either way, we finished in front, I had pressure the whole way and it definitely elevates the problems I was having.

After having your stint in MX2 overseas, is there anything particular you have learned over there that you feel you can translate to your performance here?

Yeah, just like the confidence that it brings. I could say over there learn to be really aggressive on the first couple of laps. You can’t really translate that to here at all, because everything is sort of one-lined and follow the leader, so you can’t really use that aggression that comes from overseas, really. Its weird to explain, but its hard to translate the riding, even if the confidence it brings is good.

With the new Honda 250 platform for 2022, how far down the line do you feel you and Honda Racing are with the development of that? Is there a lot more improvement to come from the bike as the season unfolds?

There could be some improvements with suspension and that, but for me I feel it’s close enough to just ride all year. The way the bike was reacting on the weekend wasn’t great, but that was mainly because of the way I was riding with some fatigue and things like that. The bike is a lot better than what it would have seemed like. I believe it’s in the ballpark, close enough once I sort myself out the bike is going to be much better.