Direct updates from round one of the season in Victoria.

Follow Racefeed for direct updates of the MX1 and MX2 motos in the opening round of the 2022 Penrite ProMX Championship at Wonthaggi. 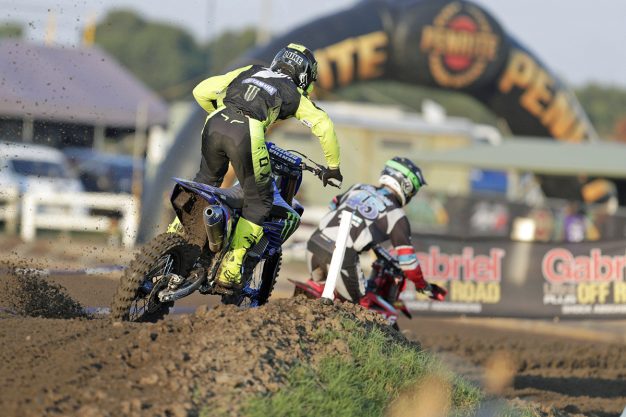 MX2 moto one:
Noah Ferguson (GasGas Australia) claimed the holeshot of the opening Pirelli MX2 moto, with Todd hot on his heels, while Yamaha privateer Brodie Connelly, Jesse Dobson, Alex Larwood and Haruki Yokoyama (Empire Kawasaki) filled the top six positions. The main team riders quickly dispatched of Connelly as Larwood moved up to third, and Dobson and Malkiewicz into fourth and fifth respectively. By the fourth lap Todd had closed the gap on Ferguson and charged into the lead, with Larwood sweeping into second position a lap later. Larwood kept Todd within 1.5 seconds for the remainder of the moto and the pair stretched out a big lead over the Serco Yamaha pairing of Dobson and Malkiewicz by the time the chequered flag fell. Yokoyama finished fifth, ahead of Ryder Kingsford (Yamalube Yamaha Racing). Jaie Constantinou (Empire Kawasaki), Isaac Ferguson (GasGas Australia), Dylan Wills (Husqvarna Racing Team) and Hugh McKay (Yamaha), rounded out the top 10.

MX1 moto one:
Webster stored a huge holeshot from Luke Clout and Kirk Gibbs in the opening Thor MX1 race and rapidly began to pull away, with Tanti, Ferris, Waters and Moss holding down the remaining top seven positions early. On the second lap Webster crashed, and fell to ninth, before Gibbs also made a mistake while in second, allowing Tanti and Waters to fill the top three positions, with Moss and Latimer in fourth and fifth. As Clout pulled out a five-second lead at the mid-way mark in the moto, Webster went to work, steadily picking off riders and moving past Waters into third as the clock continued to wind down. Further back, Metcalfe moved his way into fifth ahead of Latimer, but all eyes were on Webster as he passed Tanti, and began eating into Clout’s seven-second lead. A mistake by Clout around a lapper allowed Webster to close on to the back of the Yamaha rider, but then Webster again crashed in a rutted corner, handing Clout an unassailable 10-second lead at the chequered flag. Tanti finished third ahead of Waters and Metcalfe. Latimer, Gibbs, Moss, Rykers and Mellross claimed the top 10 positions. Former champion Dean Ferris (Honda Racing) finished a disappointing 17th.

MX2 moto two:
When the gate dropped on the second MX2 race, Wilson Todd again scored the holeshot with Ryder Kingsford, Rhys Budd, Bailey Malkiewicz and Dylan Wills in hot pursuit. Larwood made some early moves to slide into fifth, while out front, Todd again began to extend a healthy lead. Malkiewicz then moved into third after some spirited dicing with Budd, with Larwood hanging onto his coat-tails to move into fourth. At the mid-way point Larwood then made a calculated pass on Malkiewicz and capitalised on a crash from Kinsgord to jump up to second place, and set about chipping away at Todd’s 5-second lead. Further back, Dobson made a move into fourth past Budd, but as the clock ran down and the track became rougher, Larwood closed the gap on Todd. Larwood kept the pressure on, but Todd remained unphased and claimed a one-second victory over the Yamaha rider. Malkiewicz, Dobson and Kingsford rounded out the top five. Budd, Constantinou, Wills, Yokoyama, Liam Andrews and Kaleb Barham (Husqvarna Australia) filled the top 10 positions.

MX1 moto two:
Webster again scored a great holeshot off the start of the second MX1 moto, followed closely by Tanti and Gibbs, with Clout further back in seventh. Clout moved his way into fifth, but struggled to get past Gibbs, finally making his way past near the mid-way mark of the race. Waters followed suit a lap later, shuffling Gibbs back to sixth. Clout and Waters then passed a fast-starting Metcalfe and began closing the gap on Tanti. At the midway mark Gibbs also got by Metcalfe for fifth, with Mellross, Rykers, Ferris and Dylan Wood (KTM) holding down the top 10 positions. Clout then began to heated battle with his team-mate, Tanti, which allowed Waters to close within striking distance. Clout clawed his way past Tanti, before Webster suffered a spectacular crash when he tucked the front wheel in a rutted corner. The crash handed the lead to Clout and promoted Tanti and Waters onto the podium positions. Webster remounted but surrendered fourth to Gibbs and finished a frustrating fifth. Metcalfe crossed the line in sixth, ahead of Mellross, Rykers, Ferris and Matt Moss (102 Motorsports Yamaha).