Expert opinions on the MX1 and MX2 title favourites ahead of round one.

We’re just three days out from the opening round of the 2022 Penrite ProMX Championship at Wonthaggi and the excitement levels are ramping up. On the cusp of enjoying our first full national series since 2019 and with some real depth in both the MX1 and MX2 classes, this season is shaping up to be a special one. MotoOnline spoke with a range of industry experts this week to get their predictions of who will stand on top of the series podiums once we get to Coolum. 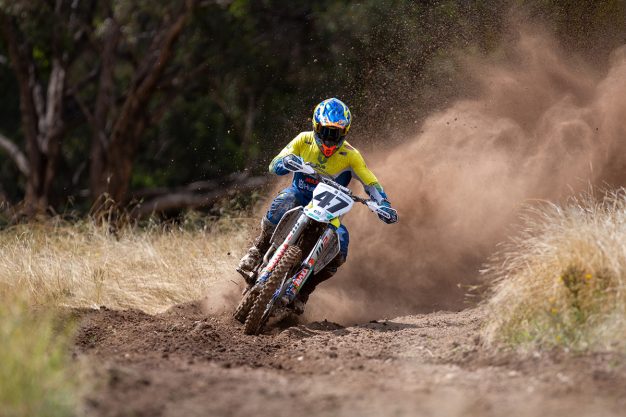 Kyle Webster is coming off a dominant MX2 championship and trains a lot at Wonthaggi, so it’s hard to not put him at the top of the list, especially as he’ll start the championship on a high note. His riding style will work well on a 450 and I’m excited to see what he can do this year. Todd’s always a strong contender and after losing the title last year I think he’ll be fired up coming into round one and he’ll get stronger towards the later part of the year. As the 2021 champion, Clout will be confident this year, and if he can leave Wonthaggi with a podium and some good points, it’ll set the scene for a good season of racing. You can’t go past Wilson Todd for the MX2 title. He’s returning from a stint in Europe and will be confident and strong all year. I’m picking Larwood for second this year. He’s got raw speed, and if he can execute two good starts every race and stay off the ground he’ll be a podium contender. You could flip a coin over Jesse Dobson, Rhys Budd and Bailey Malkiewicz for the third spot, and it’s going to come down to who pulls consistent starts and who can stay upright. I’ll go with Dobson, though, as he has great pace and has proven he can win races.

I feel like I could never not pick Todd Waters for the MX1 championship. He’s just a machine, and even though he has so many projects on the go, I believe he’s getting faster, fitter and even more motivated as he gets older. Luke Clout will be right up there again this year. He’s the man and you can’t go past him, and I think his team-mate Tanti will be a real contender this year. He’s been super-fast so far this year and has been either winning or finishing on the podium at everything he shows up at. In MX2, I think Wilson Todd’s experience, both at home and in Europe will pay dividends for him this year. After a year in Europe he’ll feel less pressure and I think he’ll mop the other blokes. I expect Jesse Dobson to come out swinging this year, too. He’s with the best MX2 team and after finishing second last year, he’s got a good chance. For third I’m going to pick Rhys Budd. Again, he’s on a great bike with a great team and he’s the up-and-coming rider of that top group.

I’m on the Luke Clout bandwagon, for sure. He’s been around the block and has moved from the crashing phase to the consistency phase, and with the best team behind him, he’s got to be the favourite to win again this year. I’m thinking Webster will surprise a lot of people this year, mainly because of his skills in soft sand, which will set him up well at the opener at Wonthaggi and the final round at Coolum. Todd Waters is my pick for third. He’ll probably win a couple of races here and there, but as far as outright speed goes, I think Webster has him in the soft stuff and Clout will have the edge on hard-pack. In MX2, I think Wilson Todd will take it. He’s won the title twice before, has that European experience and he loves the Honda. If Dylan Wills is coming into the season healthy and with a head of steam, I can see him doing well. I love his style and he’s one of those guys who can light the world on fire if he’s feeling good. In third I’m going with Jesse Dobson, but I can’t trust him to stay healthy all season. He’s blazing quick and I’m hoping that Ford Dale has helped him to iron out his tendencies to crash and get hurt. 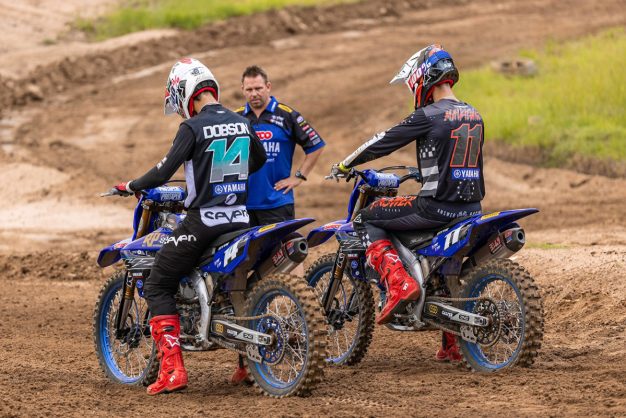 I know it’s a bit of an outside call, but I’m picking Kyle Webster for the MX1 title this year. The consistency he showed and the confidence he got from dominating the MX2 class last year, combined with the series starting at his home track will catapult him to a great championship and signal a ‘changing of the guard’. I’ve spent a bit of time over the off-season with Aaron Tanti and he’s looking fast and feeling wanted at the CDR Yamaha Monster Energy Team. 2022 is a pivotal year for him, he’s got a good base after a solid 2021, and he’s done well in the pre-season. I’m picking Clout for third, solely because there’s going to be so much pressure on him. I’m a big fan of his, but it’s always harder to back it up, and he’ll have a really big target on his back this year. Wilson Todd is definitely the favourite to take the MX2 title and with his experience and drive, it’s really his to lose. I like the fact that Dylan Wills has had a great off-season, he’s fit, and he’s always been a good starter, and when you combine that with a factory Husqvarna ride, all the ingredients are there. I think Jesse Dobson will round out the podium – he’s not the young kid in the class any more, he’s fast and comfortable on his bike, and if he stays healthy, he’ll be right there at the front.

It’s exciting that we’re about to see a full season of racing again and I think Luke Clout will take the championship after a tough fight. He’s just stubbornly determined and I think he would’ve got on even more of a roll last year if the season wasn’t cut short. Aaron Tanti has shown great speed so far this year and looks to be really comfortable with the strong CDR team, so I think he’ll be a real contender this year. And then there’s Waters, who’s just so good and experienced – over the length of the championship, he’ll be right there racking up points. I think Kirk Gibbs will be close to the top three as well, and will benefit from being back with the KTM team that he’s been successful with in the past. In MX2, Wilson Todd is a no-brainer – he was already awesome before he went to Europe and that experience will have only benefited him. That’s also why I’m putting Bailey Malkiewicz up there. He’s incredibly talented and probably hasn’t been able to show that in Australia yet, but he would’ve grown up and learnt a lot from his time in Europe. I’m picking Dobson to round out the podium. He gels well with the Serco Yamaha team and has had a solid off-season with no mishaps, and no-one will ever doubt his raw speed.

Even though 2021 was a super-short season, I think Luke Clout proved exactly what he’s capable of, and if he carries that same form into 2022, he’s going to be a hard man to stop. At the same time, Todd Waters is a guy you simply can’t discount over the course of a season – he’s probably had more race time than anyone over the off-season and is looking fit and relaxed. I’m predicting Aaron Tanti to finish third – he’s got a great team and a fast bike underneath him and regardless of the formats and tracks he’s raced at over the pre-season, he’s looked very quick. In MX2, it’s hard to look past Wilson Todd. He’s claimed titles in the class before and now that he has the European experience behind him, it’s going to take something special to beat him. Jesse Dobson could be the guy to do that – he’s certainly got the pace and a great bike beneath him, but he’s going to have to have a near-perfect championship and his consistency record can be patchy. Rhys Budd is my pick for third, since he was something of a revelation in his rookie season last year and he’ll only have gotten faster, fitter and stronger since then. 2022 could be the ideal opportunity for him to shine.

I’m a big believer in that fact that the defending champion deserves to come in as the rider to beat and, in the case of Clout, I can’t see why we shouldn’t rate the number one plate-holder as the pre-season favourite. There have been others who have stood out more in recent months, which is why I have MX1 rookie Webster in P2 – even though he’ll likely win Wonthaggi – and Aaron Tanti third, but honestly, it was difficult to list just three riders (call me crazy for leaving the likes of Todd Waters, Kirk Gibbs and even Hayden Mellross out… not to mention the returning former champions in Dean Ferris and Matt Moss). There can only be a few guys though and, like Sleeter said, I feel we’re amidst a changing of the guard at the moment. As for MX2, Todd won a couple of titles convincingly before heading to GPs and will be my pre-season pick for that reason. Alongside him on the box, Budd and Dobson should be there again, but I will reverse their finishing order of last season as Budd looks to make that next step.