Earlier this week, SX Global, the Queensland-based promoters of the upcoming FIM Supercross World Championship, revealed some much-anticipated details of what the all-new series will look like when the gates drop later this year. MotoOnline focuses on some of the key points of the major announcement in this Countdown. 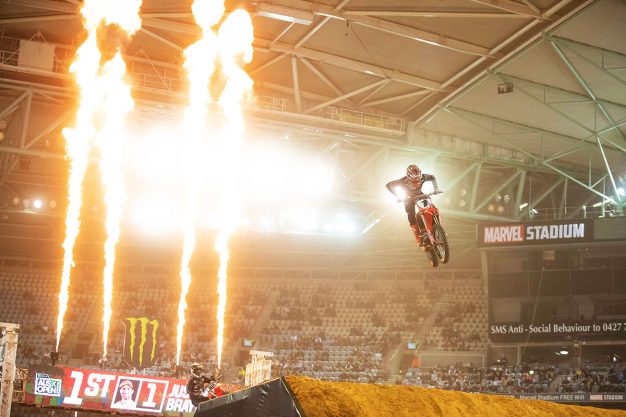 6. Five-round pilot series:
Before this week’s announcement, one of the biggest questions we had was how an overhauled FIM Supercross World Championship would fit in with other major, established championships – namely the Lucas Oil Pro Motocross Championship and the FIM-backed MXGP World Championship. We now know that there’ll be some synergy this year, with a ‘pilot’ five-round series taking place from September until November. However, from 2023 the new World SX championship will expand to at least 10 events between June and November. It’s understood that races are being considered across multiple continents, including Europe, Asia, Oceania and the Americas. Given Mubadala Capital’s massive investment (see more below!) in the series, it’s expected there will also be at least one round in the Middle East also, but we will see. We also found it interesting that SX Global’s media release stated that current standalone supercross events are a ‘significant untapped opportunity’ as they are ‘not currently linked by any official FIM championship status’. These sell-out events (such as Geneva and Bercy), prove there’s certainly an appetite for supercross racing at an international level.

5. Support for teams that commit:
The FIM Supercross World Championship going head-to-head against the established and internationally-recognised MXGP and the Lucas Oil Pro Motocross Championship from 2023 onwards poses something of a quandary for manufacturers and teams and will make for some tough decisions as far as resourcing goes. SX Global is well aware of this and has pledged more than $50-million (all dollar references in USD) in team and rider support over five years, which includes covering the cost of freight of motorcycles and equipment, logistics support, seed-funding for every team and appearance fees at every event. The championship structure is limited to just 10 team licenses, but these financial incentives would certainly be attractive. Note that they’re not just talking about manufacturers, either. With this arrangement, it could be possible that a major sponsor pulls together a team of riders racing – even to the extent of for different manufacturers – as its race team. This reduces the reliance on manufacturers and makes the whole thing a commercially attractive package for team owners. Whether it’s expanded manufacturer teams, sponsor teams or the advent of career supercross specialists, this is an area we’ll be watching with interest.

4. Confirmed series structure:
As mentioned, the series features an exclusive structure with only 10 team licenses available to independent owners. At the same time, the championship will follow the usual two-class format for WSX (450cc) and SX2 (250cc), but teams who sign up need to commit two racers to each class. That equates to a total of 20 riders lining up in each field. The remaining two spots on the 22-rider starting gates will be allocated to two wildcard entries. These wildcard slots can be filled by either local racers (the most likely scenario, to promote the sport at a domestic level) or sponsor-driven exemptions.

3. Format, entertainment and broadcasting shake-up:
Over the years, the promoters of the all-new FIM Supercross World Championship have certainly proven they’re capable of creating polished, entertaining and professional supercross events. Part of their management team were the driving force behind Australia’s highest-profile supercross events, the AUS-X Open between 2015 and 2019, as well as holding successful FIM Oceania Supercross events in Auckland, New Zealand in 2018 and 2019. With that experience behind them and a passion to progress the sport, expect the World SX to deliver something special for the fans. They’ve promised unique racing formats, in-stadium attractions to ramp up the overall live entertainment experience and innovative broadcasting methods. These could include live on-board cameras, data and potential radio comms between the riders and teams, similar to what we see in Formula 1, for example. As we get closer to the start of the championship we expect these specifics will be confirmed in more detail, as the SX Global team is exploring a lot of avenues to immerse the viewers further into the sport. 2. Huge per-round prize-money:
SX Global’s announcement also stamped a $250,000 USD prize pool per event for 2022, for a total $1.25m pool of cash for the opening year alone. On a per-round basis, this makes the upcoming world championship the richest in the history of supercross, but it’s worth mentioning that in the past the Monster Energy Cup has given out $1-million each to Ryan Villopoto (2011), Marvin Musquin (2017) and Eli Tomac (2018) for clean-sweeping the standalone event’s three races. SX Global has only announced prize-money for 2022 and not for subsequent years once the series expands to 10-plus rounds. It’s still early days, so there hasn’t been a specific breakdown of how the money will be distributed across the results table, but we understand each main event winner could walk away with $40,000. In comparison, the AMA Supercross pays about $12,000 for a round win, with about a $100,000 prize purse per round.

1. Multi-million-dollar investment backing:
It takes money to bring a world-class international professional sport to life. A lot of money. But SX Global has secured a major investor in the form of Abu Dhabi’s government-owned Mubadala Investment Company – a sovereign investor that manages assets worth a staggering $243-billion. With the backing of such a major investor, SX Global has announced it can support the teams and racers to the tune of at least $10-million per year over the next five years (plus prize money). Mubadala Capital isn’t just providing financial support, either. It’s got extensive development resources at its disposal and the two representatives – Matt Kim and Russ Pillar – now sitting on the SX Global board bring decades of experience backing and leading global sports, media and entertainment companies. Two further board members, Tavo Hellmund and Tom Potter, have extensive experience working with Formula 1 teams and organisations, in addition to V8 Supercars founder Tony Cochrane, plus AUS-X Open creators and Australian Supercross Championship rights-holders, Adam Bailey and Ryan Sanderson, who also have significant background in content creation through AME Management.