Team Honda HRC’s Jett Lawrence made a dream start to the Monster Energy Supercross 250 SX East title chase, claiming a controlled victory in the first round at Minneapolis. The likeable Australian remains focused on the task at hand, showing maturity beyond his years in his approach to the remaining rounds. He features in this Conversation. 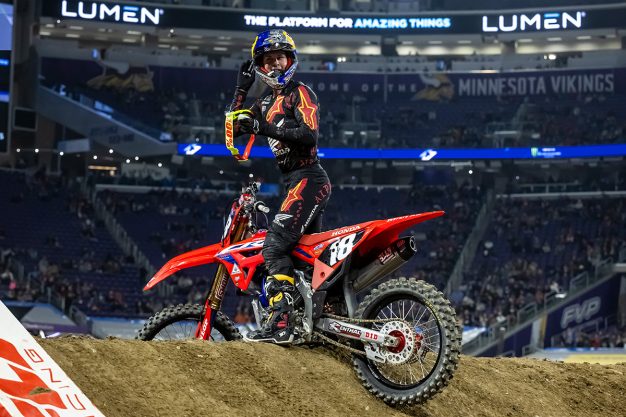 What are your thoughts on how stacked this class is?

I love it. I mean we got into the sport because of the close racing, it’s not just for the fans, it makes it good racing for us also and we all have so much respect for each other. We know that we will get close to each other, but not try to take each other out. Especially this podium, we have worked a lot of our butts off to get here, and I know Cameron [McAdoo] and I are in the same category before west coast with injuries. I’ve got mad respect for everyone in the class, I mean we have got big hitters. It’s good because if you do have a bad start, it’s not like it’s going to be easy to get back up to the podium position like the west coast… the west coast guys have been going good, congrats to Christian [Craig], HJ and [Michael] Mosiman. I’m excited for this year, [Austin] Forkner is looking good, so is McAdoo and even J-Mart [Jeremy Martin) so I’m excited for the season.

Talk about managing that, you had Austin pretty close for a while, everybody is saying that how gnarly the track was. Was that full pace or were you trying to manage it a little bit?

I would say probably just trying to manage it, because as most of the guys said the track got pretty chewed up, and it could cost you with any slight mistake – just missing a line, especially in that long rhythm where we were three in, that’s a really big stretch for a 250 and through the transitions, it got some little ruts at the bottom. It was kind of just focussing on staying your line. Yeah, Forkner was keeping me honest, I would look back and be like ‘dam I still see green’, so I had to make sure I stayed on my toes there, and both the boys, I could see them and they were riding well and keeping me honest, I kind of felt like this is a really good race, I had a good flow, track was really gnarly, but I kind of found a way how to ride it. I was pretty happy with my pace and how felt – all-round was a pretty good race with the boys.

You looked comfortable on press day and throughout the day as well, take me through your weekend as far as bike changes and what you contributed to your comfortable feeling today.

Bikes changes… it was pretty good. I came in with the bike feeling really well, it was just a matter of a few clicker changes here. I mean the biggest change was probably more so engine, we went with a different primary from the practice to the heat race and the main event, just because the start, I was little too aggressive on that. Coming in, press day I just took my time, I could see on track walk, just looking at the track it was pretty notchy and peaky, so I think it was just taking my time, and I felt like this year a lot of the guys weren’t rushing into sending big rhythms, everyone was kind of feeling it out. Same with practice, I feel like some guys were sending it, but other ones were just taking their time getting used to, getting a flow, nothing crazy. I felt like that was a little different for me, because I am usually that dumb guy to go and send it, try to do those hero lines, but I think it was a lot calmer day coming in, bike was handling awesome and, like I said, only a few clicker changes which was great, and I think that is what kind of helped in the main event, having that calm day all day. You were going to race Anaheim 1, things happened and you are here now. Was it weird to get in the mindset of, ‘yeah I’m going to racing today’, when it’s a day time race, you are pitted inside the stadium and there’s no interaction with the fans?

I mean, I was totally oblivious to that to be honest. I was excited to go racing, I was a little kid at a candy store, each time coming off the track I was like, I want to go back out again and do more laps. It never really crossed my mind much of getting a mindset of ‘we’re going to do the race and stuff’, it was kind of more so just having a great time, I think Christian Craig said this on the West Coast of just kind of being present and enjoying, because you can never know what will happen in the future, it could put you out pretty early. The biggest think was I was just enjoying it today, I was having fun and talking to riders. The last few years I have been a real pain in the but, I’ve been real focussed on myself, and I think its not the way to go, I think Colt [Nichols] was kind of really good about that last year, we were just both talking to riders because we are going out there and doing the same thing, I think that kind of creates that bit of extra respect for each other. I mean, I had a great day today, I had fun, and even without the win I had a fun time riding my bike, it was good, so I think it was more so being excited to race again.

To follow that up, so many guys – Christian is 30 years old and he is now realising be in the moment, Jason [Anderson] is 29 – be in the moment. You are a teenager and you are finding that out, so many people don’t realise that until later in life. So good of you to understand that now and what was it that kind of made you sink that in? Then after the three of you park on the triple, there’s a level of respect that hey we are going to go at this, but be respectable about it.

That’s because Dazzy [Darren Lawrence, Jett’s father] beat the information into me [laughs]… not really. I think maybe just being more mature and just kind of learning from other riders. There’s a lot more other guys out there that know way more than I do and with way more experience and I think it’s stupid if I don’t listen to those guys and learn off of them. So, just listening to the west coast guys, the 250 class and even the 450 class, just learning what they say. I’m pretty sure even this year I’ll probably learn something off of Forkner or Cameron. So, I think it’s always just got to stay listening and just learn from other people’s mistake and hopefully that you don’t go through the same thing.

Do you feel like you have a target on your back? You’re going to have this red background going into next week with the Triple Crown or do you kind of feel like maybe the battle and success you had from Pro Motocross kind of feels like you can withstand this pressure, kind of having that target? What is that like having these guys looking at you and trying to knock you off, specifically?

I think just having the red plate you always have that bit of a target on your back because obviously that guy has the points lead. At this point in time, you’ve really got to make sure you stay on it because the points are very close. But as long as I just keep doing what I’m doing and putting in those good results, if I lose the red plate next weekend, I’m not going to be too worried. As long as I’m just there on the podium each weekend and keep putting in good races and race like how I know how to ride, I think I should be okay. It’s definitely going to have a target on your back with the red plate. It could be on anyone and they’d want to go after that guy because they’re the main guy right now. Hopefully, everyone just has a really good race and gets some really close racing and has fun just like tonight.

How are you going to go celebrate tonight?

I’m going to go probably celebrate, it’s probably already past my bedtime. I’m already in bed probably playing Xbox or something like this. I’m probably just going to get some good tucker and get some good shuteye and hopefully go back to the chalkboard and keep working.