Australian Hunter Lawrence has been a model of consistency in 2022, landing on the podium in each of the five 250SX West outings that have been contested so far and breaking through for his first win of the season at Glendale on Saturday. The 22-year-old now sits just eight points behind points-leader Christian Craig and he spoke to the media post-race in this Conversation. Hunter, you won the race, take us through it.

It was a wild night, an exciting three races. It was my first-ever Triple Crown, but at the same time like I thought it was going to be tough, more endurance side of things, but it was really three sprints. I had no idea what to expect going into it, it was my first was one. It was cool, three mini heat-race main events or whatever you want to call it. Its weird, when you go 2-1-2, right after I didn’t actually feel like I won it because of the moto scores, but yeah crazy night, stoked!

You’ve talked about getting a better start for the night’s racing and maybe being more aggressive. Timed qualifying you looked awesome, you got the top spot. What about the race, where are you at 1-10 in the season with your capability?

The day show was really good, one of my best ones yet which was awesome, great to try and carry that momentum into the night show. It’s tough because I feel like anyone but the majority of the top five guys can sprint at qualifying pace for 10 minutes – the breaks are long enough to kind of regroup yourself. If you are not super-fit, it wasn’t really where someone who has done the hard yards really comes out. Yeah, the starts were better to an extent, they weren’t holeshots… Christian pretty much had three holeshots. There’s still that to work on, so we are going to go back and keep working, for sure.

Do you think you made some gains in putting some claws into Christian, giving him a bit of a warning that you are there?

For me, not really, but Vince [Friese] maybe [laughs]… It wasn’t really me tonight, I’m not going to sit here and say it was. First one, when I got into second he had a good gap and I was okay, ‘save it’, I was not likely to pull five or six seconds in on this short time. Second one, it obviously happened. Last one I was pushing, sprinting, it was tough everyone was really similar in speed, I just did the best I could and it worked out tonight.

Your consistency and poise this season has been super-impressive. I just wanted to know how nice does it feel to finally see that pay off with an actual win?

For sure, it’s cool. It’s such a unique night because anything can happen, it’s like an extended outdoors day, the two motos go towards one, except the three motos go towards one. It’s crazy, it didn’t feel like a traditional Supercross for me, as I’m so used to one main event, one start, one shot. Yeah, I’m looking forward to next weekend, obviously, I want to do it on a proper night as well. I want to get a holeshot, that’s my little goal for what I want. 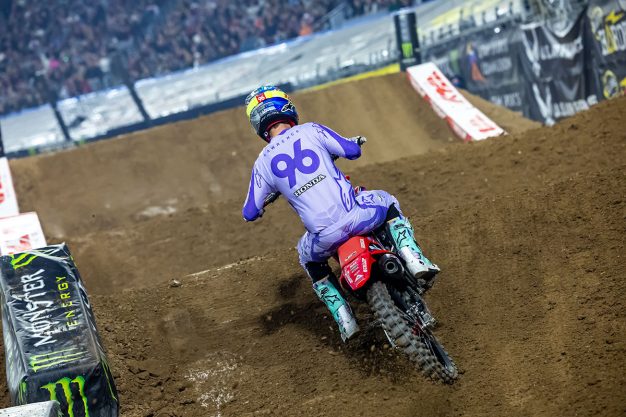 First main, there were a few times I saw you going double-double-double in that long rhythm section. Was there a reason you decided not to go triple-triple – track conditions?

It wasn’t quite sure. I mean double-double-double is so painful, it just feels like it is never-ending. That turn was getting tricky, I was stupid because the rut I was taking was getting really choppy, but I was too stubborn to try another one. I would not get the drive, I would come up short or I would back out at the last second.

You did the Australian traditional ‘shoey’ on the podium there, but out of the boot. From the reaction from when it actually hit your mouth, there must have been a lot of sand n that boot because it didn’t look like it was much fun…

The dirt was actually the enjoyable part – the champagne tastes so bad! I don’t know if it would taste much better out of a glass, but it wasn’t really pleasant. With Daniel [Riciardo]’s gear, it’s his tradition… every time he is on the box he does a shoey. I thought, ‘why not?’, we got the win, what better time to do it than then? It was for Daniel.

I’m sure you saw the crash between Christian and Vince. When you are in second and third going for that pass, does that play with your head at all? What are your thoughts making that pass?

I’m not sure what you mean, there wasn’t really a move for me to make the pass as I watched it all unfold, like literally right in front of me. From my perspective, it was easier obviously, because you didn’t have to pass anyone.

I meant like in the third race, when you are following Vince, after you saw the crash in the previous race…

Yeah, you have got to be strategic with where you pass him and anyone else that is really aggressive, you try to make the pass in an area where there’s not a retaliation spot in the next turn or there is somewhere you know you are a bit faster than them. Yeah, definitely, the pass does become more strategic, for sure.