After a tough return to professional racing last year, former multiple national MX1 and SX1 champion Matt Moss is primed and ready for a make or break 2022 season. The BBR 102 Motorsports racer made his intentions clear with a winning outing at the Coffs Harbour Stadium MX over the weekend, so MotoOnline caught up with the 33-year-old to ask him Five Questions. 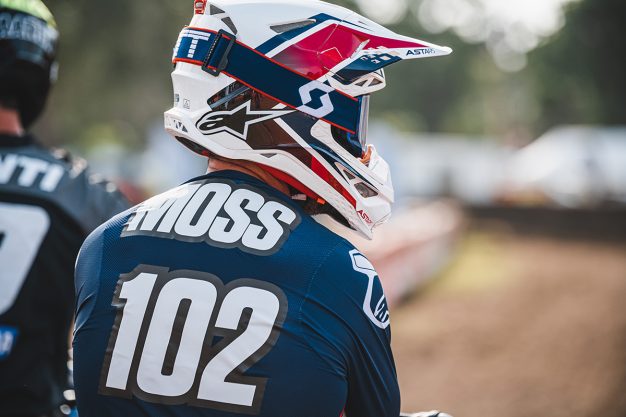 How did it feel to be back racing for the first time in six months?

It felt awesome and the Coffs Stadium MX is a great event. I had my wife, son and daughter there, and we had, like five 50s under our truck going racing. It was just a cool weekend with a great atmosphere. Before this, my last race had been the Maitland round of the Australian ProMX Championship and that didn’t go to plan. I didn’t tell anyone at the time, but I cracked my wrist at Port Macquarie two weeks before Maitland, which is why I faded at the end of the day. Last year wasn’t a great year and I made every mistake that I possibly could’ve. There were a lot of unknowns with trying to run a team and stuff, but this year I want to rectify that and get after it.

Looking at the results from this weekend, you were right up there mixing it with the CDR Yamaha Monster Energy guys, Luke Clout and Aaron Tanti and beat them both in the main event.

Yeah, I won first practice and was second behind Tanti in second practice. In Super Pole I made a couple of mistakes in the first section, but I’m not sure I would’ve beaten Clouty’s time as he put in a really great lap. I holeshot the first 12-lap heat, then Clout got past me and I couldn’t match is early pace. Once we got into the rhythm of the race I was able to maintain the gap and I felt my last three laps were my fastest. The second race was similar – I held Clouty off for two or three laps, but then slid out and lost about four seconds and finished second again. It started raining before the main and they shortened it from 15 laps to 10 laps and I knew it’d be hard to beat Clout in the mud. I got a good start behind Tanti, but he made a mistake and I was able to get past. From that point I just tried to ride smoothly and keep the errors to a minimum and got the job done, with Tanti and Clouty behind me. To be honest, I probably wasn’t the fastest guy there over the weekend. I felt like I had Tanti’s measure, but Clouty was a step ahead with his intensity on the opening laps. I’m happy with my result and with where I’m currently at – I’m a lot further ahead with my pre-season preparations than I was this time last year. 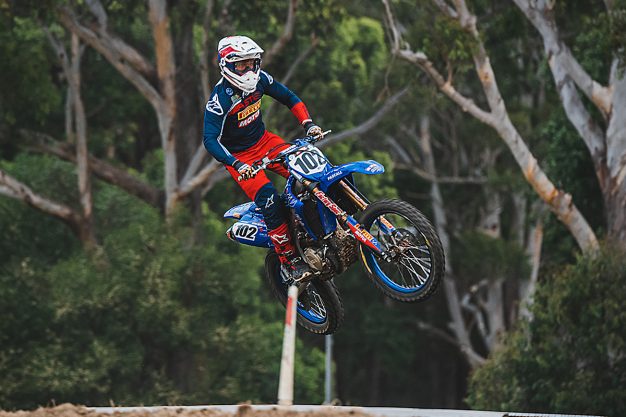 Sounds like things are progressing nicely. Will your twin brother Jake be joining you on the 102 Motorsports team again in 2022?

It’ll just be me and Bayden Blanchette going racing. It was hard last year trying to manage the resources between myself and Jake, so this year all resources will be on me as we concentrate on both the motocross and supercross championships. Our bikes are in a better position this year, our suspension is better, I feel like we’re starting from a good platform, whereas last year we were still trying to build the platform! I love racing with Jake, but it’s definitely easier being a one-rider team and not having to swap suspension between races and manage resources. I can have two identical race bikes and really focus on myself and doing the best I possibly can. Yamaha has come on with a bit more with support, which helps a lot, I’m concentrating a lot on training hard off the bike and doing whatever I can to give myself the best shot at 2022. I’ve told my wife and kids that this will be my last year racing if I can’t land a factory ride in 2023. It’s just not feasible otherwise.

And what about your on-track goals? Are you aiming to win the ProMX championship this year?

I am, but I’ll go to the first round with an open mind. I’ll be happy to come away from that first round with some points and maybe a top five. I know what I’m like and I just need to get myself on a roll. I’m going to do some pre-season races and all that stuff, and I’m going to be fit this year. Last year I was trying to juggle my family and work and I thought I was ready, but I just wasn’t. Then I had those injuries and broke my shoulder blade and my wrist, it just didn’t go the way I wanted it to go. This year I want to enjoy it, but still take it very seriously.

How did you deal with all the turmoil and uncertainty that got thrown up in 2021?

It was an emotional roller-coaster, that’s for sure. After Maitland I went back to driving a digger for a plumbing company I work for and I worked as many days as possible to save enough money to race properly this year. The uncertainty was a killer, though. I’d start training for the next event, but then it’d get cancelled or postponed, so I’d go back to work to pay for that week of training. For a while there it felt like I wasn’t making any headway. I really hope there’s more certainty from here on – we’ve just got to learn to live with this virus, as the past two years have been really, really difficult to secure budgets and sponsors. Even now we’re trying to lock in our final sponsors, but no-one wants to support a team that’s only going to go racing for three rounds again. In saying that, I’ve got great people in my corner, who’ve committed again to supporting me for another year and that really makes all the difference.