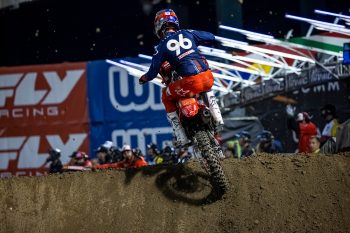 Following a runner-up result in Oakland, Hunter Lawrence was left wanting more on Saturday after a mediocre start in the main event resulted in another charge to the podium.

Lawrence showed once more that he has the speed and race-craft to slice his way forward, an improved start at round two seeing him fifth in the opening stages to gain better early track position.

“Oakland wasn’t a bad night – we got second overall,” Lawrence explained. “Still, I’m definitely a bit frustrated. I had a few more laps than last weekend to work on Seth [Hammaker] and we had a good battle – he was riding really well in the beginning, so I had to keep just pushing through.

“My start wasn’t ideal, so we’re going to be working on that this week, but we’re fit and healthy. Next weekend we’re moving on to San Diego, so hopefully that will be a good race.”

The Team Honda HRC rider now sits second in the 250SX West standings, eight points outside of Christian Craig (Monster Energy Star Racing Yamaha), who has controlled the race from the front in each outing, while Lawrence on both occasions has had to work his way through the order.