Highs and lows that shaped the world’s toughest rally in 2022.

For 2022, the infamous two-week Dakar Rally returned to the endless desert of Saudi Arabia and it was as tough as ever. Favourites crumbled, world firsts were made and the racing at the top of the charts extremely tight. In this Countdown, MotoOnline.com.au highlights the pivotal moments that shaped this year’s event. 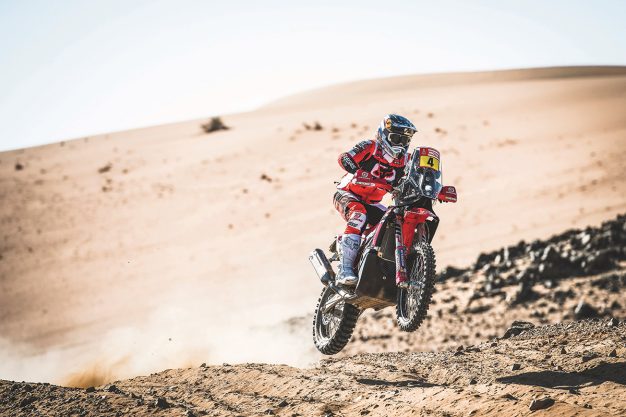 8. Strong start for Sanders:
GasGas Factory Racing’s Daniel ‘Chucky’ Sanders began the 2022 instalment of the brutal two-week event on a tear. After debuting at the race last year, Chucky showed his hand early by taking the prologue win, then chose to start 15th on the opening stage, hoping that it’d give him a good opportunity to get into the rhythm of the race, with plenty of lines to follow. The strategy paid off – while many of the favourites struggled to find a tricky waypoint hidden in the rocks and dunes, Chucky sailed through and claimed the opening stage win and a memorable first victory at the infamous race.

6. New winners in the books:
2022 saw some new names rise to the top of the leaderboards, including former AMA racer Joaquim Rodrigues (Hero Motorsports Rally) and former MotoGP winner Danilo Petrucci (Tech 3 KTM Factory Racing). Rodrigues jumped to the top of the standings on Stage 3 with his first-ever stage win (he first entered the Dakar in 2017), and it was an emotional victory since Paulo Goncalves, who was tragically killed in the Dakar in 2020, was his brother-in-law. Two days later, Petrucci claimed a memorable victory at his first-ever Dakar on the loop from Riyadh to Riyadh. It wasn’t without incident, though, with the former road racing star crashing as he tried to avoid a camel in the dunes. Petrucci’s victory came at the expense of Price, who initially won the stage, but was subsequently penalised six minutes for speeding in a neutralisation zone, dropping the Australian to fifth.

5. Flash floods and dangerous stages:
Heavy rain during the opening week forced the Dakar rally organisers to modify the course at the last minute. Stages 2 and 3 were supposed to run as the traditional marathon stage, where competitors camped overnight and worked on their machines themselves, without team support. However, heavy rain and flash flooding forced organisers to scrap the marathon and simply run it as two conventional stages. Stage 3 was also shortened by 100km, due to the first part of the course being largely submerged. Later that week, stages 5 and 6 saw the bikes and quads race on separate courses from the cars and trucks, but switch the following day. However, the four-wheeled machines chopped up the stages too much and the 404km stage was shortened to just over 100km because it was too dangerous for the bikes to continue. 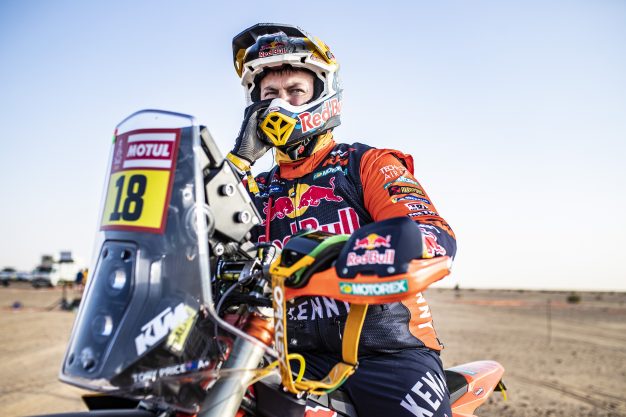 4. Sanders finishes week one on a high, then DNFs:
The churned-up, shortened Stage 6 saw Sanders again blaze to the top of the timesheets, as the GasGas Factory Team rider won the stage by 2:26 over his team-mate and rally leader Sam Sunderland. It meant Sanders ended the week on the best possible note, and after a rest day, was ready to turn the screws as the rally entered the second half. Disaster struck, though, before the second week could even begin. 10km into the liaison to the start of Stage 7, Sanders crashed on a highway and the ensuing impact with a foot-high curb fractured his left elbow, broke the radius in his wrist and damaged his kidneys. He was taken to hospital and ruled out of the rest of the rally. “I’m really lucky to be alive,” Chucky said on social media afterward. “It’s been a rough Dakar and a long eight months away from home training for this race. It’s really disappointing to end it this way but this is the rally life.”

3. Price rebounds:
After a horror start to the Dakar, Price had a mammoth task chipping away at the time gap between himself and the leaders. Whenever he made up ground, further navigation errors would set him further back. Still, Price kept focused, and on the 375km Stage 10, finally captured his first win of the 2022 Dakar. A relatively late starting position meant he could focus on his roadbook, and as a result, he put on a clinic as he rocketed up the leaderboard to sixth. The next day saw him experience more navigation frustration as he dropped another 30 minutes on the leaderboards and tumbled to 10th. A runner-up result on the final 164km sprint to Bisha was a positive way to finish the rally, but it wasn’t enough to move him any higher in the standings.

2. So close, yet so far, for Benavides:
On the same stage that Price experienced his only victory of 2022, his Red Bull KTM Factory Racing team-mate and defending champion, Kevin Benavides, experienced heartbreak. The Argentine was the second man into the stage, and just 10 minutes off the overall pace, but 134km into the stage his campaign cruelly unravelled when a sudden engine failure saw his KTM roll to a halt. Under the new ‘wild card’ rule, Benavides was able to return to the starting grid for Stage 11 (albeit with a hefty time penalty that ruled him out of the overall standings), and charged to the top of the charts and take a memorable stage win on the penultimate day of the rally.

1. Victory for Sunderland and GasGas:
After 12 intense days of racing, Sunderland claimed his second Dakar overall victory, following his memorable, breakthrough win in 2017. The Brit came into the final, short 164km blast with a slender seven-minute lead, and even though he had to run second on the stage, he charged hard and held Honda’s Pablo Quintanilla at bay, winning the Dakar by just 3m27s. Sunderland led more stages than any other rider, including a five-day string at the top of the leaderboards from Stages 2 to 6. In total, he led the rally for eight of the 12 stages, despite only winning one stage, proving he managed his race strategy perfectly. 2022 marked Sunderland’s ninth Dakar. During that time he’s experienced five DNFs, two victories and two thirds.